Why Are Blacks Still on Board With Biden? 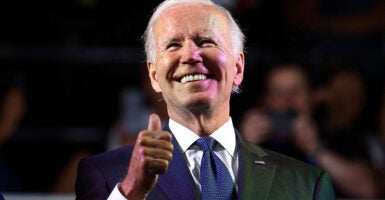 Recent polling shows black approval for President Joe Biden at 62%, which, according to The New York Times, is higher than "any other race or ethnicity, age group or education level." Pictured: Biden greets fans as he attends the opening ceremony of the Maccabiah Games at Teddy Stadium in Jerusalem on July 14. (Photo: Ronen Zvulun/Getty Images)

Overall approval for Biden from Times/Siena College stands at 33% and from Pew 37%.

However, both polls show approval for the president much stronger than the national average among minorities.

The Times/Siena College poll shows black approval for Biden at 62%, which, according to the Times, is higher than “any other race or ethnicity, age group or education level.”

Per Pew, black approval for Biden stands at 57%.

However, Pew also shows a marked difference in approval for Biden from all minority groups, compared to white voters.

Why the difference between whites and minorities?

One obvious answer is that the white figure includes a larger percentage of Republican voters.

But this still leaves a very important question that everyone, certainly leaders in the Republican Party, should be asking.

Why do minorities disproportionately lean Democrat?

Current polling shows the issues most on the minds of voters are inflation and the economy.

Inflation is nondiscriminatory. Every American is being hit by the same price increases in the supermarket, at the gas pump, in housing, and across the board.

Given that everyone is concerned about our dismal economy, why should approval ratings for the performance of our president be so different for whites and for minorities?

Let’s focus on blacks because the difference is most pronounced here.

According to survey data from the last few years compiled by my organization, CURE, there is a very large gap in attitudes among blacks, compared with whites, regarding the most basic functioning of the country.

Many more blacks than whites see racism still as a major problem. According to Gallup polling from last year, 84% of blacks, compared with 59% of whites, believe racism is widespread.

Only 31% of blacks, compared with 62% of whites, believe that blacks “have an equal chance of getting a job for which they are qualified.”

And, particularly telling, 74% of blacks, compared with 48% of whites, think “government should do more to solve problems.”

Responses in the new Pew Research polling about what’s causing this latest round of price increases show how little so many Americans understand about how our economy functions.

Most do not understand that inflation is caused by government spending and printing excessive amounts of money. Most, 49%, said it is business taking advantage of the current economic situation to raise prices.

Bottom line is that in order for the Republican Party to attract more minority voters, Republicans need to do a much better job going into minority communities and educating these voters about what is actually going on in the country and what it means to them.

As I recently wrote, the latest round of Supreme Court decisions protecting life, strengthening our Second Amendment right to bear arms, and bolstering parents’ ability to choose where to send their child to school are overwhelmingly in the interests of minority Americans.

In a nutshell, where the crucial battle for minority voters has been lost over the years is allowing these voters to believe that freedom is not in their interest.

Ironically, the civil rights movement was about freedom. It then got diverted by the left to big government and socialism.

In order to get the nation moving again, we need all Americans on board.

We need to get the crucial message of freedom to our minority citizens.