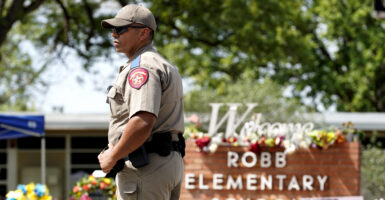 An investigative report from the Texas House explains how a constant focus on border issues created an opening for the 18-year-old shooter who killed 17 schoolchildren and two adults and wounded 17 more. Pictured: Three days after the massacre, a police officer stands guard May 27 outside Robb Elementary School in Uvalde, Texas. (Photo: Wu Xiaoling/Xinhua/ Getty Images)

Illegal immigration has consequences for so many aspects of our society, from public health to health care to economics and so much more. Its greatest impact may be on law enforcement and public safety.

It turns out that the mess at the southern border, which has been a problem from almost the moment President Joe Biden took office, may have contributed to the lax police response to the mass shooting at an elementary school in Uvalde, Texas, that left 17 children and two teachers dead and 17 other kids wounded.

A report on the massacre from a special investigative committee of the Texas House highlights how Robb Elementary School officials and Uvalde police made critical errors in preparing for and reacting to a mass shooting.

Certainly, anyone who has followed this story and viewed surveillance video can see that the police response was unacceptable and at times inexcusably lackadaisical.

The committee’s investigation reinforces that and is scathingly critical of the actions of law enforcement. However, there’s more to the story than that.

The report explains how the constant focus on border issues created an opening for the 18-year-old shooter.

A factor that led to the “lax” conditions on the school campus was the frequency of security alerts and campus lockdowns due to “bailouts” by human traffickers attempting to evade police.

A bailout occurs when a smuggler tries to outrun police in a vehicle or on foot. The investigative report notes that these incidents often end “with the smuggler crashing the vehicle and the passengers fleeing in all directions.”

These bailouts prompt local schools to go into lockdown. This recently had become an overwhelming problem for Uvalde, population about 15,200.

“The frequency of these ‘bailout’-related alarms—around 50 of them between February and May of 2022—contributed to a diminished sense of vigilance about responding to security alerts,” the report says.

In the months before the shooting, some sounded warnings about the bailout problem in Uvalde.

In an April interview with National Review, Uvalde Mayor Don McLaughlin warned that illegal immigration and human smugglers were becoming an intolerable problem amid resources that were stretched thin. McLaughlin, a Republican, said that since the U.S. Border Patrol was tied up with the immediate problem, it had fewer resources to devote to anything else.

This means that local communities had to do much more to make up for the gaps in enforcement.

“We’re seeing the traffic up more; the ‘gottaways’ and the ‘walk-arounds’ are up probably 200%,” the mayor said.

In the interview, McLaughlin said that initially it was three to five bailout chases a week, but Uvalde residents told him those numbers had escalated to “two to three a day.”

Bailouts typically occur around residential areas and schools, he said, because those locations make it more difficult for law enforcement to pursue vehicles and suspects.

Uvalde CISD Director of Student Services Kenneth Mueller testified that since February 2021, high-speed chases have been a daily event in the Uvalde area, causing Uvalde CISD schools to be secured or locked down frequently, with 47 ‘secure’ or ‘lockdown’ events happening since late February 2022, and approximately 90% of those being attributed to bailouts.

Parents had become so concerned about the frequency of bailouts and school lockdowns, the report adds, that they “offered to hire off-duty police to supplement the Uvalde CISD police presence.”

These circumstances related to the border crisis don’t excuse the poor response of law enforcement to the shooting, but they do provide a larger context for the total failure. Uvalde emerges as one of many communities that are being completely swamped by the pernicious effects of illegal immigration.

Allowing illegal immigration to spiral out of control, as the Biden administration has done, is hardly an act of compassion.

Instead, it opens the floodgates to nefarious activity by human traffickers and other evildoers. It creates havoc for small communities and law enforcement agencies that don’t have the resources or the power to solve the problem on their own. And it has terrible consequences, both direct and indirect.

Lives are lost and trust is broken. Anarchy leads to violence and criminality, and ultimately the loss of virtuous liberty and self-government.