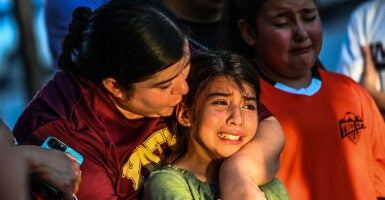 The police officers involved should be required to watch this surveillance video and respond individually to investigators.  Pictured: Gabriella Uriegas, a soccer teammate of shooting victim Tess Mata, stands May 26 with mother Geneva Uriegas as they visit a makeshift memorial outside the Uvalde County Courthouse. (Photo: Chandan Khanna/AFP/Getty Images)

The newly released surveillance video of police officers responding to a mass murder in progress at a school in Uvalde, Texas, does little to explain or justify the baffling actions of law enforcement.

The video, obtained by the Austin American-Statesman, shows the teenage gunman while he was still outside Robb Elementary School, his entry into the building, the initial arrival of police officers, their force buildup, and the resolution over an hour later.

Watching the video, I couldn’t suppress my amazement at how poorly the responders performed May 24, when the 18-year-old shooter killed 19 third and fourth graders and two teachers. Before police finally brought him down, he also wounded 17 other children.

Before the now infamous mass shooting in 1999 at Columbine High School in Colorado, the doctrinal response to an active shooter was to go in as quickly as possible, confront the assailant, and resolve the threat.

Immediately after Columbine, “as quickly as possible” was redefined to mean when you had four police officers, called a “quad.” This was based on the accepted room-clearing “stack” requiring four officers.

Very soon, this response was deemed too slow, and the minimum requirement was cut to two armed responders.

More recent mass shootings and how several were handled drove another change, to a high-risk approach in which “the first officer there goes in and confronts the shooter.”

That’s one person. This guideline for law enforcement was driven by the need to stop any ongoing shooting absolutely as soon as possible.

Also, in several incidents, a single officer engaged the shooter and his actions stopped the killing even if the shooter wasn’t immediately hit by gunfire. The engagement alone forced the shooter to focus on the “threat” posed by the cop, not on his helpless targets.

Police officers violated all of this in Uvalde. Two general explanations have been given and, strangely, they are both accurate.

The first is the personal failure of the police officers involved. No professional protector can draw any other conclusion.

The second is that the officers involved were not adequately trained, a situation undoubtedly aggravated by the “defund the police” movement.

The new video shows three police officers entering the elementary school within a few minutes of the shooter’s arrival. They head down a hallway toward the classroom where the gunman has taken refuge and is shooting at students and teachers. They move cautiously and retreat as soon as they hear more shots.

More police officers arrive, and they seem to spend endless minutes at the far end of the hallway with no apparent plan or onsite leadership. They take no action even as the police presence continues to build. Inexplicably, one officer in civilian clothes, wearing a vest and military Kevlar helmet, takes time to sanitize his hands with lotion from a wall-mounted station. Others check their phones.

Finally, a heavily armed squad of officers seemingly from several organizations (based on the various uniforms) arrive over an hour after the start of the incident, move down the hallway, breach the door, and shoot the killer.

After speaking to other security personnel with police or military experience (several have extensive expertise in school security) to make sure I was not letting my emotions get the best of me, I have drawn some conclusions.

First, local police were ill trained and didn’t possess the initiative to take needed action at the beginning. The first three officers immediately should have breached the classroom and engaged the shooter. This would have been high risk, as they had only pistols and (it appears) soft body armor, but they had the advantage as three professional good guys against one untrained bad guy.

Second, the “buildup” of police officers added nothing beneficial, because they weren’t utilized, even when they brought their own rifles, hard body armor, and ballistic shields. This is inexplicable. If they had been ordered to stand by, as was earlier reported, then the person who gave that order was massively wrong—factually, professionally, and morally.

If the officers in the hallway collectively made the decision to wait, they acted with callous cowardice and dereliction of duty. I cannot ascertain which it is, but it can only be one or the other.

As to the odd, bizarre actions of the officers while waiting in the hallway, I just have to shake my head. Were they acting out of fear or anxiety? Only they can answer that. They should be required to watch this video and respond individually to investigators.

The final assault by law enforcement was adequate and ended the shooter’s attack. These officers seemed to be well trained and probably had done a “hard breach” before.

It is sad to think that children were terrorized, shot, and killed; teachers pleaded with 911 operators; and family members begged for help and action while over a dozen officers waited.

Those who cry out for defunding the police bear culpability in this failure. If you strip police organizations of public funding and support, you not only have fewer officers than you need, but critically, they don’t have the needed training or confidence to confront an extreme situation such as the mass shooting in Uvalde.

Just because you have a badge doesn’t mean you are ready to breach a room with a shooter on the other side of the door. Correct methods must be taught, then drilled, then repeatedly refreshed.

Given the requirement for as much speed in the response as humanly possible (minutes are crucial in these disastrous events), this means all cops need this training, not just SWAT teams.

Police must be held to the highest standards. Officers must overcome fear and the natural instinct for self-preservation by acting as true protectors. They can do that only if they are trained.

The madness of the “defund the police” movement must be held accountable, and the damage completely reversed.

The police officers who failed in the Uvalde shooting have no excuse. But we have no excuse if we let it happen again by failing to ensure that all police are ready to be “the first officer through the door.”

Children’s lives will depend on it.