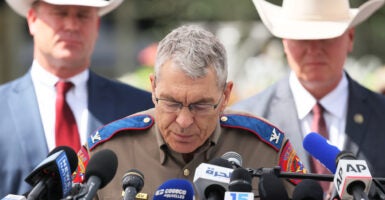 Information about what happened before and during the tragic school shooting in Uvalde, Texas, has changed continually. The bottom line is that it’s not a happy story, but confirms that school security is still a work in progress.

Having a plan is better than not having one. Absent good implementation, practice, and real rehearsals, however, the plan will fall apart.

What unfolded in Uvalde on May 24 is a dark comedy of errors and bad decisions.

Originally, the story was that the shooter got inside the school, entered a classroom, and barricaded the door, and then frustrated police officers tried to apprehend him.

The school district’s police chief, Pedro “Pete” Arredondo, decided that the situation had devolved into a hostage situation, and besides, his men didn’t have the wherewithal to make a tactical breach. Given those “facts,” the chief decided to wait for other forces with more capability to arrive.

Almost all of that turned out to be wrong. The shooter killed 19 students and two teachers at Robb Elementary School and. Another 17 adults and children were wounded or injured in the attack.

We now know that the door to a fourth grade classroom invaded by the shooter wasn’t barricaded and may not even have been locked. Instead of two underequipped and wounded officers facing a huge obstacle, it was four officers with a ballistic shield, at least two of them armed with rifles, standing outside an unlocked classroom door.

Arredondo, the school district’s police chief, now says that he never thought or knew he had authority at the scene as incident commander. The “decision” to wait before entering the room where the carnage was ongoing—and confronting the killer—now seems to have been a complete lack of initiative on everybody’s part.

The long delay in stopping the shooter’s killing spree was completely unjustified. Arredondo was placed on administrative leave Wednesday.

What does all this mean? The situation violated all four steps of effective school security.

First, no one picked up on the many signals from the shooter of his potentially horrific intent. His misogynistic and violent comments online reference rape. His abuse of animals and dubious conversations and associations on social media all were ignored.

The fact that an underemployed 18-year-old had hoarded enough money to purchase two pricey, high-end firearms wasn’t noticed even by his parents or custodial grandparents. No preemptive action was considered, let alone taken.

Second, school officials grossly violated control of access to the building. An unsecured door from the outside left a gaping hole in protection of the students that sunk law enforcement’s response plan nearly immediately.

The shooter had acted out on the street beside the school, firing at two people across the street and at the building itself. This behavior produced a 911 call and the dispatching of police officers, but apparently no call to lock down the school.

Somehow the shooter apparently knew exactly which outside door was unsecured. Was he lucky? Had he done a reconnaissance? Or perhaps all the doors actually were unlocked?

Having that one door unsecured eliminated any value to directing visitors toward the front doors. Basically, school administrators had access control in name only. It really didn’t exist.

Third, despite the shooting going on outside, no lockdown was signaled inside the school. When police chased the shooter into the building, he simply entered a fourth grade classroom at random. Inside, the teachers were completely unprepared. The classroom door had not been locked and no one was in a safe place.

Again, the key here is that no lockdown occurred. This is the very definition of failure.

Fourth, and probably most telling, no one mounted an effective response onsite. This isn’t terribly surprising in a small town, but the incomprehensible response of law enforcement exacerbated the situation. When more police officers did arrive, they took no effective action whatsoever, allowing the killing to go on for an hour.

A trained onsite team would have been the best preparation. But barring that, police have to know what to do in an active shooter situation. In this case, officers should have initiated the breach of the classroom door immediately and taken out or arrested the shooter.

Plans are great. They help tremendously. But plans must be well conceived, and then they must be briefed and discussed by all potential participants.

There must be a system that we call “crawl” (talking individual teachers through necessary actions in their classrooms), “walk” (slow-going drills that are evaluated and critiqued), and “run” (full-on drills that add some stress factors such as speed and  noise).

Administrators must ensure that this is done, both when the system is initiated and on an ongoing basis. These actions find weak spots and build reflexive responses that move fast and with positive effect. If you don’t execute the plan, it’s guaranteed not to work.

All the mistakes still could be “rescued” by initiative and courage. Sadly, that was missing also. The response collapsed completely.

We must learn from Uvalde.

The answer isn’t banning guns. That solution is dubious in its effects. But even if one accepted the solution, it would take years to provide an appreciable corrective.

We can’t depend on the certainty that it “won’t happen here.” It could, and we must be ready.