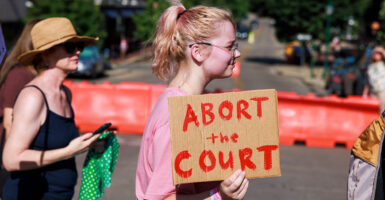 A coalition of elected local prosecutors, including leaders from 29 states and Washington, D.C., has released a statement pledging not to enforce abortion bans. Pictured: A protester holds a placard reading “Abort the Court” during a protest on July 4 before a parade in Bloomington, Indiana. (Photo: Jeremy Hogan/Getty Images)

With the fall of Roe v. Wade, 90 left-leaning attorneys general and district attorneys across the country have pledged to not enforce criminal charges related to laws protecting the unborn.

In a joint statement, the prosecutors emphasized that although they have varying personal and moral beliefs on abortion, they are united in the “firm belief that prosecutors have a responsibility to refrain from using limited criminal legal system resources to criminalize personal medical decisions.”

The statement organized by Fair and Just Prosecution, a coalition of elected local prosecutors, included leaders from 29 states, one territory, and the District of Columbia. These attorneys general and district attorneys represent a total of 91.5 million constituents, including 12 states where abortion has been banned or is likely to be banned in the coming weeks.

“With many states now seeking to criminalize those who seek, perform and receive abortion care, elected prosecutors are the last line of defense in protecting patients and providers from criminal charges,” Miriam Krinsky, executive director of Fair and Just Prosecution, wrote in a press release. “At this frightening and dark moment, we desperately need the bold leadership demonstrated by these signatories—and hope to see far more prosecutors across the country join this chorus.”

“Those entrusted with enforcing our nation’s laws abdicate their responsibility by expressly saying they will refuse to enforce them,” he told The Washington Stand. “This is a betrayal of the public trust and undermines the principles which hold our country together.”

Since the overturning of Roe v. Wade returns authority to states, abortion laws across the country vary.

Last year, Texas passed a law that prohibits abortion except in instances when the procedure would save the life of the pregnant woman or avoid “serious risk of substantial impairment.” The penalties for doctors who violate this law include loss of medical license, $100,000 in fines, and a first-degree felony charge if the child dies.

In a statement, Gonzales wrote, “Outlawing abortion will not end abortion; it will simply end safe abortions and prevent people from seeking the care and help they need for fear of criminal prosecution. I refuse to subject members of my community to that risk.”

“The attorney general is supposed to advise on the law and enforce the law, not engage in activism,” Weber argued in response. “This makes this statement all the more nonsensical.”

Similarly, in North Carolina, Democrat Attorney General Josh Stein opposed enforcing the state’s 20-week abortion ban. Despite facing an ultimatum from Republican lawmakers, Stein responded in a letter saying his department’s attorneys are “conducting a thorough legal review” on the law. Stein is among the 90 signatories of the Fair and Just Prosecution statement.

Weber, who practiced law prior to working in public policy, believes that prosecutors refusing to enforce abortion laws leads America into more division and lawlessness.

“If constituents or leaders don’t like laws, they can work within the systems of our constitutional order to change them,” he said.

“No one can deny that the rhetoric of abortion activists has resulted in the justices being more in the crosshairs of the public discussion,” explained Weber. “This is extremely dangerous. On top of this, there has been a series of attacks on pregnancy resource centers and churches—with far too little condemnation from elected leaders.”

When asked what elected officials can do to restore law and order in a post-Roe world, Weber was clear.

“Instead of adding fuel to the fire with rhetoric attacking the justices and pregnancy resource centers, elected officials should do their job to enforce the laws on the books,” he underscored. “Taking to the streets in a threatening manner is not a solution, however. All Americans and our elected leaders could help lower the temperature by working within our constitutional order instead of undermining it.”

Deborah Laker is a staff writer for The Washington Stand.