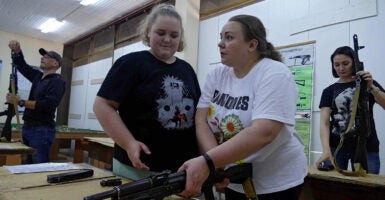 Gun control in Ukraine has proved to be highly problematic in the wake of the Russian invasion, a Ukrainian activist told a gathering of journalists and friends of DonorsTrust in Washington recently.

Nataliya Melnyk, communications director for the Ukraine-based Bendukidze Free Market Center, said that in Ukraine, before Russian President Vladimir Putin’s forces invaded, “You could not own handguns legally; only hunting weapons if you had a license.”

“All handguns were ‘award’ weapons, randomly distributed by our Ministry of Defense. Usually, you needed to have some connections to get these weapons,” she said at the event sponsored by DonorsTrust, a nonprofit libertarian- and conservative-leaning donor-advised fund.

Amid the invasion of Ukraine by Russia, Melnyk noted the development of arming citizens—but with restrictions and even then not all citizens.

“In areas not under immediate attack, the government said to these territorial units, ‘If you are not under immediate danger of attack, please return the weapons. We will safely store them in a warehouse. If something happens, you can come and get them.’ Of course, [the Ukrainian people] said, ‘No, thank you.’”

Melnyk criticized the Ukrainian government’s move to arm citizens while at the same time imposing restrictions, such as mandatory storing of guns in a warehouse.

“We do see improvement, but it resembles two steps forward, one step back … because that idea about returning weapons is also very recent. We jumped from that idea to the idea that we do need weapons for self-defense,” she said.

The Ukrainian government is currently discussing further plans for arming citizens, Melnyk said in her June 16 remarks at the City Tavern Club in the Georgetown neighborhood of Washington.

“It never was such a big issue in the broader Ukrainian society, because we were a peaceful nation,” she said. “A lot of people honestly believed [and] I was one of them: ‘Why would you need a weapon? We are not going to war, and if you are not a hunter … why do you need it?’”

But after the Russian invasion, “it appears we really do need it,” she said.

Melnyk described the cultural change toward caring about self-defense after Russia invaded. “It was nearly impossible to get a time slot at a shooting range because so many Ukrainians went in to learn how to actually handle a gun, because they have no idea,” she said.