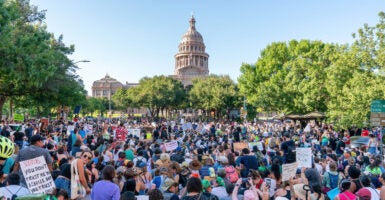 Abortion rights activists march to the State Capitol in Austin, Texas, after the overturning of Roe v. Wade by the U.S. Supreme Court on June 24, 2022. (Photo: Suzanne Cordeiro/AFP/Getty Images)

A Texas county judge sided with abortion providers and temporarily blocked the enforcement of a pre-Roe v. Wade law Tuesday, allowing clinics to perform abortion procedures in the state.

The Supreme Court overturned Roe v. Wade, allowing a dormant 1925 law that outlawed abortion in Texas to take effect, according to Reuters. However, a Harris County judge halted the enforcement of the law.

With Roe overturned, Texas Attorney General Ken Paxton demanded that the 1925 law be put back in place and enforced across the state, Reuters reported.

“Prosecutors may choose to immediately pursue criminal prosecutions based on violations of Texas abortion prohibitions predating Roe that were never repealed by the Texas Legislature,” Paxton said in a statement Friday. “Although these statutes were unenforceable while Roe was on the books, they are still Texas law.”

Fearing prosecution under the 1925 statute, Texas abortion clinics filed a lawsuit Monday pleading for a temporary restraining order to block the application of the preexisting ban.

The case resulted in favor of the abortion clinics. Texas will revert back to the abortion laws enforced prior to Friday’s Supreme Court decision, which allows for abortions up to the six-week mark.

The county attorney stated that the temporary restraining order will stay in effect until a further hearing on July 12, KHOU reported.

The block has been met with backlash from pro-life organizations, including Texas Right to Life.

“Although some government officials are temporarily blocked from enforcing the pre-Roe statutes against certain abortion facilities, the law is still valid and abortion is no longer a ‘lawful medical procedure,’ Texas Right to Life attorney Emily Cook said in a statement provided to The Daily Caller News Foundation. “This means that abortion is considered homicide under the Texas Penal Code and can be prosecuted as such.”

The pro-abortion left is—as expected—now suing me and the State of Texas to block our state’s pro-life laws. I anticipated this and am ready. They will lose. Texas laws defending the unborn will win. #RoeVsWade

Texas passed a trigger law in 2021 meant to take effect 30 days after the overturning of the Roe v. Wade decision. The law makes it a second-degree felony “for a person who knowingly performs, induces, or attempts an abortion.”

Under Texas Senate Bill 8, also established in 2021, physicians in Texas are forbidden from prescribing abortion pills. The law prohibits abortion after about six weeks with a detectable fetal heartbeat and incentivizes citizens with rewards of at least $10,000 to sue anyone who helps a woman get an abortion.

Paxton stated he plans to wait for a final judgment from the Supreme Court to enact the 2021 trigger law that bans abortion outright.

“We cannot calculate exactly when until the court issues its judgment. My office will publicly announce an effective date for the act as soon as possible—and we look forward to doing so,” he said.

Other states with similar trigger laws, including Louisiana and Michigan, are facing backlash from state courts regarding enforcing new abortion restrictions.

A 2006 Louisiana state law states that any and all abortions are to be criminalized in the state immediately following the overturning of Roe v. Wade. However, Orleans Parish Civil District Court Judge Robin Giarruso temporarily suspended enforcement of the Louisiana law on Monday and scheduled a hearing for July 8, according to BBC News.

In Michigan, Gov. Gretchen Whitmer is hoping to block the enactment of previous laws that would prohibit abortion in the state. Michigan’s 1931 abortion law bans abortion and criminalizes doctors and nurses who provide subsequent abortion services.

Blake Mauro is a contributor to The Daily Caller News Foundation.