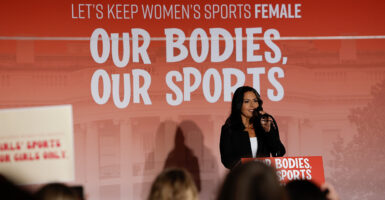 "There is such a thing as a woman. We do exist," former Rep. Tulsi Gabbard, D-Hawaii, says at the "Our Bodies, Our Sports" rally in Washington. (Photo: Anna Moneymaker/Getty Images)

“This issue isn’t a Republican issue, and it isn’t a Democratic issue: This is an equality issue.”

These words from Jennifer Braceras, director of the Independent Women’s Law Center, at the recent “Our Bodies, Our Sports” rally in the nation’s capital capture an increasing sense of bipartisan urgency to reinstate equality and safety as biological males who say they identify as females continue to excel in women’s sports.

The rally occurred Thursday, the 50th anniversary of the enactment of Title IX, legislation designed to protect girls and women from discrimination on the basis of sex in any federally funded education program or activity.

Speakers at the rally in Northwest Washington’s Freedom Plaza included lawyers, politicians, athletes, and feminist activists, and boasted a large contingent of Democrats.

Tulsi Gabbard, a former Democratic congresswoman from Hawaii who ran for president in 2020, was one of the most anticipated speakers.

“The Biden administration’s actions today are seeking to erase the entire female sex and reject the objective reality that there are biological and physiological differences between men and women,” Gabbard told the crowd of about a hundred women and girls, including some daughters attending with their fathers.

“This is the height of disrespect, offense, and what at its core is a hatred for women, because if you loved women, if you supported us, then you would take a stand for women and girls,” she said.

While in the House, Gabbard introduced legislation called the Protect Women’s Sports Act of 2020, which would have prohibited athletic associations or programs receiving federal funds from allowing biological males to compete on a women’s sports team.

At the rally, she expressed disappointment that the Biden administration continues to ignore those fighting for fairness and equality in girls and women’s sports amid the upswing in transgender athletes.

A main theme of the rally highlighted the left’s increasing inability and unwillingness to define male and female or man and woman, or to differentiate between the sexes.

“There is such a thing as a woman. We do exist,” Gabbard said, adding:

The Biden administration’s attempt to ignore the real differences and athletic abilities between male and female is ultimately a rejection of biology and reality, Gabbard said.

Several other left-leaning women spoke at the rally, including Kara Dansky, author of “The Abolition of Sex: How the ‘Transgender’ Agenda Harms Women and Girls” and president of the U.S. chapter of Women’s Declaration International, a global organization “dedicated to protecting women’s sex-based rights.”

Identifying herself as a lifelong Democrat and feminist, Dansky quoted from her book:

Here is the truth we cannot speak: Gender identity does not exist in any real, material sense and the transgender [agenda] is simply a made-up concept that is used to justify all kinds of atrocities. It is, in effect, a men’s rights movement intended to objectify women’s bodies and erase us as a class. It is left-wing misogyny on steroids.

“The simple reality is that women are female, and men are male; it’s not complicated,” she said in her speech.

Dansky told The Daily Signal earlier that she is “devastated by what this administration is doing by redefining the word ‘sex’ to include the nebulous, vague, nonsensical concept of gender identity throughout U.S. federal administrative law.”

Lauren Levey, vice president of the U.S. chapter of Women’s Declaration International, spoke about her experience in girls sports before passage of Title IX.

Introducing herself as a “Democrat, radical feminist, [and] lesbian,” Levey argued that the Biden administration’s attempt to redefine “sex” to include gender identity would send women’s sports back to pre-Title IX discrimination and inequality.

“We are not going back to a presumption that only male athletes count. We will not accept that men’s inclusion in women’s sports trumps fairness,” Levey told the crowd. “That injustice and that insult will not stand.”

Although some on the left increasingly are unwilling to define sex as a biological difference between men and women, many speakers suggested that recognition of this important difference must be maintained to protect women in sports.

“Gender identity is a device to destroy women’s sports and women’s ability to participate in the public sphere,” Levey told The Daily Signal.

Maud Maron, a Democrat running in New York for a seat in the U.S. House of Representatives, argued during her speech for unity across the aisle in protecting the integrity of girls and women’s sports.

“This is not a partisan issue. There are Republicans and Democrats and independents, [people] all across the political spectrum who agree with all of us here on the commonsense definitions of sex and understand that our kids have a right to the nonpoliticized joy of playing sports on teams that make sense,” Maron said. “Trans people can and should participate in sports for their sex category, which is real, and not their gender identity, which is invented.”

Speakers also highlighted the fact that a growing number of women and girls have spoken out about the unfairness of being forced to compete against biological males who identify as females.

“I can’t believe we are ignoring the voices of so many women who are speaking out about this,” said Amanda Houdeschell,  events manager for the Women’s Liberation Front, which calls itself a “radical feminist nonprofit.”

“The majority of Americans believe that men participating in women’s sports is unfair and unsafe, so not only is [President Joe] Biden ignoring this issue and being anti-feminist, but he’s ignoring the majority of Americans,” Houdeschell said. “Saying that men’s feelings matter more than women’s safety and women’s rights to be in single-sex spaces and to be free from unfairness and harassment is misogyny.”

Speakers also called on female athletes around the country to speak up about their experiences competing against biological males, and urged lawmakers to protect women and girls in competitive sports.

Gabbard encouraged women “to demand that Congress and the president take immediate action to uphold the original intent of Title IX and protect the lives, futures, and well-being of women everywhere.”