‘What Is a Woman’ Exposes Disturbing Transgender Agenda 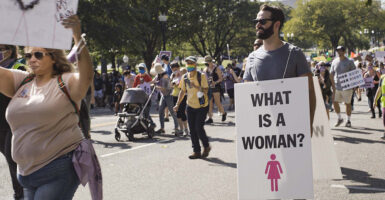 Matt Walsh and The Daily Wire's "What Is a Woman?" documentary discusses the gender identity crisis in America with a variety of experts and activists. (Photo: The Daily Wire)

“I’ve heard people say that there are no differences between male and female. Those people are idiots.”

Thus begins Daily Wire host Matt Walsh’s new “What Is a Woman?” documentary, which highlights the left’s ever-growing reluctance and inability to define gender. Think that defining the qualities of men and women is easy for most people today? Think again.

While some may struggle to “figure out” women, Walsh identifies that Western culture’s obsession with gender identity has paralyzed people from defining what a woman is. As the documentary progresses, we see further evidence that the transgender narrative has not only rejected the definitions of “man” and “woman” as insensitive and transphobic, but has dismantled the very concept of universal truth and reality.

Fittingly released on the first day of Pride Month, Walsh’s documentary is a thought-provoking, humorous, yet often emotional and disturbing film that illuminates the contradictory and dangerous narrative of the transgender agenda.

In the documentary, Walsh interviews “the experts,” such as “gender-affirming” therapists, sex-change surgeons, and gender ideology professors (most of whom are transgender themselves or members of the LGBTQ+ community), asking them, “What is a woman?”

The majority of responders say they have no idea how to define womanhood or refuse to answer the question, calling it bigoted and pointless. Not only are they unable to provide a simple definition of a woman, but they find the entire concept offensive and transphobic.

The documentary begins on a humorous note, as Walsh asks a family therapist, “How do I know if I’m a woman? I mean, I like scented candles and I watch ‘Sex and the City.’”

“What a great question!” the therapist (who has every indication of being a woman) says, nodding and smiling encouragingly.

“So, what is a woman?” Walsh asks. A disconcerted look enters the counselor’s eye: “Great question! But I’m not a woman, so I can’t really answer that.”

“I thought therapy would make me less confused,” Walsh said. Us too, Matt.

So, he takes to the streets to ask the common American if they can solve this conundrum. Surprisingly, most of the interviewees responded to the “What is a woman?” question with a blank stare and nervous laughter. Most said it couldn’t be defined and said they would accept Walsh as a woman if that’s what he believed he was.

Especially entertaining is Walsh’s trip to the Women’s March—surely they’ll know what a woman is if they’re marching for them, right? But no, the marching women either ignored Walsh or yelled, “Why are you here?”—insinuating that he was a man (without even asking his gender identity, the audacity!) and that a man had no right to attend a women’s march. “How can you have a women’s march if you don’t know what a woman is?” he asked. Touché.

What is the female gender, according to the transgender community? Walsh spoke with a transgender surgeon who differentiated between sex and gender, saying that sex-change surgery is “altering the physical characteristics of an individual to fit better with a gender identity that is female.”

In that case, what is a woman, according to this surgeon? “A woman is a combination of your physical attributes, what you’re showing to the world and the gender clues you give, and hopefully those match your gender identity.”

As if the issue couldn’t get any more confusing, Walsh speaks with a pediatrician and professor who has worked in Planned Parenthood and advocates for “gender and reproductive justice.” She provides “gender affirmation care,” saying that a good doctor is there to listen to the patient and act on what they’re expressing.

Walsh asked whether it was ethical for minors to be making life-altering decisions such as taking puberty blockers or opposite sex hormones, since children often have a fantastical, unrealistic interpretation of reality, such as believing in Santa Claus.

The documentary makes it clear that Americans can no longer ignore the transgender movement. It is permeating every aspect of society, politics, and education and now targets children as young as preschoolers.

The push for children to define their own realities and irreversibly change their bodies is perhaps what is most disturbing about the transgender agenda. In what other sphere of medicine do patients, especially young children, prescribe both their malady and remedy to the affirmation and acceptance of a counselor or physician? As clinical psychologist Jordan Peterson said to Walsh, “It’s not my job to affirm as a therapist, you come to see me because there’s something wrong.

The fact that the transgender agenda is increasingly targeting young children is what psychiatrist Miriam Grossman finds most disturbing. Grossman explains to Walsh the history of the transgender and sex-ed movement and highlights the unethical, traumatic techniques and flawed studies that have shaped it over the years. “It’s unspeakable what these people have done to our children,” she says.

Not only is the transgender movement harming women’s sports, exposing children to inappropriate material, and encouraging them to reject science and universal truth, it is also irreparably damaging children’s bodies and destroying their futures.

The most moving and persuasive interview occurred with Scott Newgent, a biological female who transitioned to a male as an adult but passionately argues against the rise in gender surgery among children and the subjectivity of gender. “I’m a biological woman that medically transitioned to appear like a man through synthetic hormones and surgery,” Newgent said. “I will never be a man. Is it transphobic for me to tell the truth?”

Newgent describes the details and horrific side effects of gender-reassignment surgery that are so conveniently hidden from public discourse. Having undergone multiple surgeries, illnesses, and painful, permanent side effects, Newgent told Walsh, “Nobody would help me, including the doctor who did this to me, because I lost my insurance. I probably won’t live very long.”

Newgent said the possible risks and side effects were never discussed when considering gender-reassignment surgery, and warns parents and anyone considering sex-change surgery that “the truth is that medical transition is experimental.”

Revealing an arm mutilated from skin grafts, Newgent broke down in tears on camera, exclaiming in horror that minor children are regularly operated on without any discussion of the risks and permanence of the surgery, or any discussion as to whether children should ethically be allowed or able to consent to such procedures.

“We’re butchering a generation of children because no one’s willing to talk about anything,” Newgent said. “This is wrong on so many levels. Kids aren’t able to consent.”

The transgender movement is ultimately an attack on scientific fact, the concept of reality, and the meaning of language. No longer are words allowed to mean one thing. No longer is the word “truth” socially acceptable, because who are we to deny “your reality” or “your truth”?

A professor of women (whatever those are, anyway), gender, and sexuality responded to Walsh’s statement that he was seeking the truth with, “I’m really uncomfortable with that language of ‘getting to the truth’ because it sounds deeply transphobic to me. The word ‘truth’ is condescending and rude.”

Sensing that this concept is a purely Western phenomenon, Walsh heads to Nairobi to immerse himself in the customs of a local tribe. In this culture, gender norms and roles are crucial to the survival of the tribe. The men protect and provide, and the women maintain the home and nurture the children. It’s an honor to be a man or a woman in this tribe, and every member knows their distinct duties and privileges.

A group of men laugh in disbelief when Walsh asks what they would do if a man wanted to look and act like a woman—the entire concept is ridiculous and unheard of. “The Maasai people don’t think much about gender,” Walsh observes on the way back home to America, “but they have a firm sense of their identity.”

Instead of solving gender dysphoria and body image discomfort, Americans’ infatuation with identity has only created greater societal instability and refused to answer the most foundational of questions. “What Is a Woman?” succeeds in highlighting the inconsistencies and dangerous agenda of the transgender movement.

Walsh’s angle is particularly effective, as he gives the majority of the screentime to pro-trans activists and medical professionals. The lack of data or persuasive argument for the trans community isn’t the producers’ fault, the “experts” simply couldn’t provide any. Walsh’s sarcastic, borderline dark sense of humor in the delightfully ridiculous street interviews breaks up the more serious, unsettling information and gives a sense of hope and common sense to the insanity that’s been normalized.

Bold, humorous, thought-provoking, and undeniably chilling, “What Is a Woman?” equips its audience to better face the ever-growing reality of the transgender agenda and its far-reaching effects through civil discourse, empathy, and a firm grasp of truth, science, and reality.

At the end of the film, it’s Walsh’s wife who’s the true MVP. “Hey honey, what’s a woman?” Walsh asks. “An adult human female,” she responds.

Of course, who knew it could be that simple?