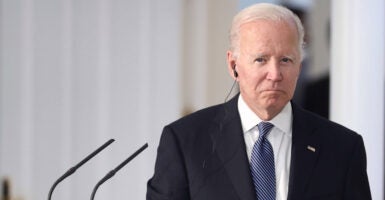 When it comes to energy policy, President Joe Biden has become a master of doing the wrong things for the wrong reasons. His policies on solar panel production and imports are prime examples.

Everyone agrees that we ought to be good stewards of the planet. That’s why it’s critical that we get energy and environmental policies right. Unfortunately, Biden hasn’t.

Instead, Biden is pushing for a rapid, government-mandated transition to a society powered by wind and solar energy that he promises will deliver zero greenhouse gas emissions. That is neither responsible nor reasonable.

Rather, it is a political fantasy agenda that will reduce access to reliable, affordable energy, damage our economy, harm the environment, and undermine our security program.

The first involved a novel application of the Defense Production Act, a law that allows the president to require businesses to accept and prioritize contracts for materials deemed necessary for national defense or to respond to natural or man-made disasters.

Biden’s anti-fossil fuel policies have sent oil and gas prices skyrocketing and caused the U.S. to lose its strategic advantage of being a dominant global energy exporter. Those are real national security issues that impair our defense capability. But forced solar panel production will do nothing to meaningfully address those problems. It will also have no noticeable effect on global temperatures, another false pretext for invoking emergency powers.

What we have, instead, is a phony emergency declaration designed to prop up solar energy use that U.S. consumers reject as inferior. That’s not just wasteful and inappropriate; that initiation is harmful to the paychecks and livelihoods of everyday Americans. Biden’s move will add yet more policy distortions to an energy market already twisted beyond recognition by government mandates, protectionism, and cronyism.

In using the Defense Production Act to bail out domestic solar manufacturers, the president clearly abused his limited special authority to pursue a political crusade. But it gets worse.

At the same time Biden invoked that act, he also ordered a two-year pause on new tariffs on solar panels that could be coming from China—ostensibly because U.S. companies won’t be able to keep up with the wholly artificial demand for panels created by his decree.

Tariffs were implemented 10 years ago to protect Americans from China’s malicious efforts to undercut the U.S. solar power industry by flooding the market with cheap products. The Commerce Department is currently investigating complaints that Chinese solar panel producers have evaded the tariffs by shipping effectively completed versions of their panels to third countries, where they are trivially assembled and shipped to America tariff-free—a ruse known as “transshipping.”

But with Biden’s tariff moratorium, even if violations of U.S. trade laws are proved, China won’t have to pay any of the unpaid tariffs.

While being able to shop for goods from companies around the globe can lead to increased consumer options, economic efficiency cannot be the only consideration. There’s no question, for example, that Chinese goods made with slave labor should have no avenue into American markets.

There is also a fairness issue. If the Chinese are dumping goods on the U.S. market in violation of law and wiping out swaths of U.S. industry in the process, they should be held to account, not given the equivalent of a presidential pardon.

Moreover, if solar panel supply is as big a national security risk as Biden says it is, the last country we should be seeking to partner with for our energy needs is our chief global rival and adversary, China.

The administration is trying to frame these initiatives as a way to address high energy prices and the rising risk of blackouts, but it will do nothing to alleviate those problems. Rather, it will unnecessarily restrict access to reliable energy sources, increase the costs of energy, strain the U.S. electrical grid, and potentially leave our nation more vulnerable to China.

Biden may think his moves make for good liberal politics, but the reality is, he is squeezing American families, fueling price increases, impoverishing the middle class, and, most ironically, risking our national security.

By refusing to change course on energy policy, he seems intent on burning the village to save it.

This article first appeared at Washingtontimes.com