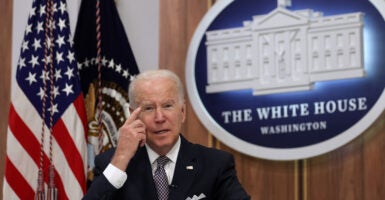 President Joe Biden, pictured speaking during a virtual Major Economies Forum on Energy and Climate on June 17, recently announced that he authorized use of the Defense Production Act to speed up the domestic production of clean energy technologies—like solar panels and heat pumps— for use in buildings. (Photo: Alex Wong/Getty Images)

Grace Hermanson is a member of the Young Leaders Program at The Heritage Foundation.

To achieve that win, he has authorized the inappropriate use of the Defense Production Act— an egregious misuse of executive power.

Last Monday, Biden announced that he authorized use of the Defense Production Act to speed up the domestic production of clean energy technologies—like solar panels and heat pumps— for use in buildings.

The Defense Production Act gives the president a broad set of authorities to influence domestic industry in the interest of national defense. Since it was passed at the start of the Korean War, the act has served as a valuable federal statute to ensure that, when called upon, the domestic industrial base is capable of providing essential materials and goods needed for the national defense.

Over the years, Congress broadened “national defense” to include national emergencies, like pandemics, terrorist attacks, and natural disasters. Biden’s latest actions, however, strain the definition of national defense past the point of credulity. He has authorized the act to serve his political goals—in this case, a radical environmental agenda.

Last year, Biden’s $2.2 trillion Build Back Better bill, which included billions in clean energy programs, failed to pass in Congress. Sen. Joe Manchin, D-W.Va., who killed Biden’s landmark legislation, stated that part of his opposition to the bill was due to its climate and clean energy provisions, saying they “risk the reliability of our electric grid and increase our dependence on foreign supply chains.”

In this latest executive action, Biden has ignored Manchin’s objections and decided to pursue his agenda without the approval of Congress.

Biden’s misuse of Defense Production Act allocated funds is nothing new. For example, the Obama administration’s 2012 invocation of the Defense Production Act to advance the production of biofuel was packaged as providing energy security for America’s warfighters. However, it soon became clear that the flawed project had nothing to do with national defense, and everything to do with a radical and expensive (the Biofuel Production Project was allotted $230.5 million) environmental agenda.

Now, in a similar initiative, Biden has authorized the Department of Energy to use the Defense Production Act “to strengthen the resiliency of the nation’s supply chain” for solar, transformers and electric grid components, heat pumps, insulation, electrolyzers, fuel cells, and platinum group metals.

According to Energy Secretary Jennifer Granholm, “For too long the nation’s clean energy supply chain has been over-reliant on foreign sources and adversarial nations.” Likewise, according to the deputy defense secretary, Kathleen Hicks, “reducing America’s dependence on gas and oil is critical to U.S. national security.”

OK—so the policy is go green by investing in domestic solar manufacturing and we will become more energy independent and less reliant on foreign adversaries.

So, does a transition from oil and gas to solar panels make us less reliant on foreign sources and adversarial nations, thereby strengthening our national security?

The answer is simple: No!

This is plainly obvious by the administration’s decision to, in tandem with the Defense Production Act authorization to stimulate solar panel manufacturing, potentially make it easier for solar companies in the U.S. to import cheaper Chinese-made solar parts from Southeast Asia.

Americans benefit from being able to access the most competitive technologies to meet their energy needs. But the president’s supposed national security reasoning is just a red herring to manipulate energy markets to his preferred technology. According to his order, we will simply be shifting our foreign reliance on energy from global oil markets to Asian solar components, while ignoring that solar energy is not a perfect replacement for oil in meeting peoples’ energy needs.

So, this is bad energy policy, terrible trade policy, and even worse defense policy given that we will now be more dependent on China, which Secretary of State Anthony Blinken just called the “most serious long-term threat” to the world order.

Biden’s misuse of the Defense Production Act is all the more frustrating in light of the real, urgent national security needs the act could be used to address.

U.S. munitions stocks are being depleted as Javelin and Stinger missiles are being sent to Ukraine, and industry says it will take years to manufacture enough to replenish those stocks. The Defense Production Act could force industry to prioritize those contracts and could provide funds to increase manufacturing capacity.

Instead, in choosing to pursue environmental pet projects, this administration is demonstrating a lack of seriousness about our national defense—at a time when the country cannot afford to be anything but serious.

This article has been corrected to reflect when Biden announced the Defense Production Act decision.