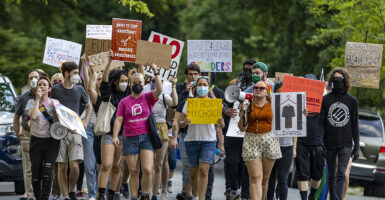 Instagram parent company Meta removed a post listing the home addresses of Supreme Court justices from the site. The justices have seen a number of protests at their homes already, like this one by pro-abortion protesters at Justice Samuel Alito's home Monday in Alexandria, Virginia. (Photo: Tasos Katopodis/Getty Images)

The Daily Signal reported on Sunday that the popular social media sites Instagram and Reddit hosted posts listing the home addresses of Supreme Court justices and urging activists to protest at their residences.

The next day, Andy Stone, the communications director at Instagram’s parent company, Meta, confirmed that the post on Instagram had been removed.

In response to a tweet by this writer asking how posts seemingly in violation of Instagram’s terms of service were allowed to remain on the site, Stone responded, “It’s not allowed. We removed this post.”

After the Supreme Court’s 5-4 verdict Friday overturning Roe v. Wade, posts disclosing the six conservative justices’ home addresses and calling for people to go to their residences and protest began cropping up online.

Protesting in front of a justice’s home is illegal under federal law, but there already have been several such protests, with little to no law enforcement response.

A source at The Heritage Foundation informed The Daily Signal that she had received a sponsored post on her Instagram feed by user @bendy.maui providing the cities and street intersections where the justices live, along with a message encouraging activists to protest daily at the homes at 7 p.m. The post reads, “No Privacy? No Peace!” (The Daily Signal is the news outlet of The Heritage Foundation.)

As Stone, the Meta executive, indicated, and per Instagram’s Community Guidelines, “personal information meant to blackmail or harass someone” is not allowed on the site.

On Saturday, Reddit user ProudTulip posted an image containing the addresses on at least three different forums on the site.

Rule 3 of Reddit’s content policy guidelines says users must “respect the privacy of others. Instigating harassment, for example by revealing someone’s personal or confidential information, is not allowed.”