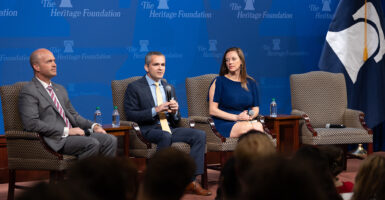 Pro-life advocates have called for the overturning of Roe v. Wade, the 1973 decision that legalized abortion nationwide, for nearly five decades and are looking forward optimistically to the imminent Supreme Court ruling in Dobbs v. Jackson Women’s Health Organization, a case that could finally overrule Roe.

Between now and the court’s ruling, expected by the end of the month, pro-life organizations are preparing to take the fight for life to the state level.

The event was intended to start a conversation about the future challenges and opportunities of a post-Roe America.

“Wherever they try to enshrine a right to abortion in state law or get it handed down from a state bench, we need to be there, fighting back,” Foster said.

Kevin Roberts, president of The Heritage Foundation, made opening remarks at the event, where he was joined by Foster and Ethics and Public Policy Center President Ryan Anderson.

Each noted the importance of continued action from the pro-life community once the Supreme Court issues its ruling in the Dobbs case.

“We’re being called to reclaim this country,” Roberts said. “We have both the privilege and the obligation of building this country to fulfill and realize what our Founders inscribed in the declaration and the Constitution.”

By continuing the fight for life, Roberts said, many other related issues also can be solved, such as the increasing rates of fatherlessness in the home and the national confusion surrounding the concept of what’s male or female.

Anderson said the work to create a “culture of life” in America could truly begin once the issue of abortion is returned to the state level.

“Overturning Roe is the beginning of a new phase of the pro-life movement,” he said, noting that action on both the state and federal levels will remain crucial.

Foster outlined four things that pro-life organizations should do once the Dobbs decision is handed down: encourage state attorneys general to enforce state laws restricting abortion; push for congressional action, such as preserving the Hyde Amendment (which prohibits the use of federal funding for most abortions) and opposing the Women’s Health Protection Act (which would effectively codify a right to abortion under federal law); demand accountability among state legislators making decisions about abortion laws; and move toward the abolition of abortion.

“We cannot accept halfway measures. We cannot stop until every life is protected in America,” Foster said.

“Abortion harms everything it touches. It makes nothing better,” he said, describing the underlying cultural narrative that for the past 50 years has made women think abortion is their only option for success.

We’ve built an entire culture, an economic system, an education system, and a society assuming that my body is the normal type, and my wife’s body is somehow defective, so we need to sterilize her body so she can compete in the marketplace and the education system on equal footing. That’s the lie behind Planned Parenthood v. Casey—that women need abortion to be equal.

Anderson noted that debunking that lie society has told women would decrease the demand for abortion and empower women to choose life.

“We have to shut down Planned Parenthood and this lethal violence in the womb,” he said. “But there are reasons why people think they need abortion. Why is there a demand for this? We have to address that as well.”

All of the speakers noted that pro-life Americans will need to be intentional about advocating for pro-life policies in their states and having genuine conversations with their pro-choice friends and family for those policies to be enacted.

“In a week, maybe two weeks,” Anderson said, referring to when the Dobbs decision is likely to be handed down, “we’re going to have to persuade our neighbors about all these truths to then enact laws, policies, and regulations to protect these children and protect these mothers.”