This Pride Month, Companies Should Skip the Rainbows 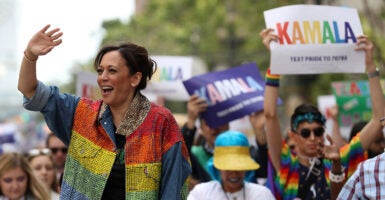 It looks like some companies are waking up to the fact they can't win with woke activists. Some companies are avoiding outward statements for Pride Month. Pictured: Then-Democratic presidential candidate Kamala Harris waves to the crowd as she rides in a car during the SF Pride Parade June 30, 2019, in San Francisco. (Photo: Justin Sullivan/Getty Images)

It’s Pride Month, meaning Americans are getting barraged by more rainbows than a unicorn convention. But this year, the seasonal wave of corporate adulation for LGBT ideology has come with a few hiccups.

First is Amazon. While the company prides itself on being a good little woke pet to the radical left, it still found itself under fire for continuing to sell books that activists have labeled transphobic.

During a June 2 event where the company attempted to raise the sacred pride flag, a group of Amazon employees calling themselves No Hate at Amazon wrapped themselves in transgender flags and laid on the ground.

Why? Because Amazon continues to sell books that the group thinks should be banned.

“Irreversible Damage: The Transgender Craze Seducing Our Daughters” and “Johnny the Walrus” are two books that the group claims are “creating a hostile workplace environment for transgender employees.”

Amazon has given in to the alphabet mob before. Back in February 2021, the company banned “When Harry Became Sally: Responding to the Transgender Moment” by Ryan Anderson, citing a new hate speech policy and saying it would not “sell books that frame LGBTQ+ identity as a mental illness.”

Thankfully, it appears that Amazon isn’t going to take the two books down. At least for now.

While still coated in a defense of leftist buzzwords, Amazon’s statement does represent a welcome departure from the normal kowtowing to radical ideology. If companies can’t completely decouple themselves from toxic wokeness, at least they can commit themselves to not censoring dissenting voices as a bare minimum.

Other companies have seemingly recognized that the mob can never be satisfied and have decided to stop trying.

Electronic Arts, the company behind the massively popular EA Sports and Battlefield video game franchises, told staff it didn’t plan to post anything pride-related on its social media.

Entitled children working for Electronic Arts threatened to stage a walkout in a blog posted June 1, writing, “Just slapping a rainbow on our logo in June without any broader action will be unacceptable.”

Reportedly, the company responded by releasing an internal memo saying that while they would celebrate pride internally, posts made by employees “may not be political in nature.”

Relatedly, Electronic Arts wisely didn’t make a statement on the likely imminent overturn of Roe v. Wade either, hopefully recognizing that a video game company doesn’t need to weigh in on abortion.

It must be said that these aren’t perfect responses. Businesses shouldn’t be involved in advocacy in the first place, woke or otherwise. Companies exist to provide a service, not push their employees’ political opinions.

But these are positive steps and should be recognized. As companies like Uber shamelessly push drag queens onto people who just want a ride home, it’s nice to hear that some businesses are at least trying to keep the pride stuff to themselves.

Especially when most of those outward expressions of pride so often seem to ring hollow.

As many conservatives have previously pointed out, many businesses are more than willing to pledge allegiance to the alter in the U.S. and Europe but are conspicuously quiet in places where leftist rot hasn’t taken hold.

Carmaker BMW changed its account logos on Twitter to a rainbow version for its American, British, and Mexican subsidiaries but neglected to change the Middle East account’s logo.

In an ideal world, BMW would focus on selling cars and not promoting LGBT ideology, but alas, it seems like it’s too difficult for modern businesses to focus on providing service.

As the public becomes more frustrated with the perverse and pervasive nature of LGBT ideology, more companies should catch on that wading into politics is bad for their bottom lines.

Until that reality sinks in, companies should give Americans a break and should leave rainbows to the rain.