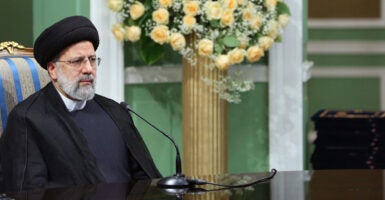 Hard-line Iranian President Ebrahim Raisi—seen here at Sadabat Palace in Tehran on May 30—has upped the ante for Iran to agree to a new nuclear deal, hoping the Biden administration will capitulate. (Photo: Iranian presidency handout/Anadolu Agency/Getty Images)

The Biden administration’s dogged determination to revive the dangerously flawed nuclear deal with Iran has not been shaken by a series of attacks launched by Iran’s Islamist dictatorship against the U.S. and its allies.

The administration already would have rejoined the nuclear misdeal if not for Tehran’s insistence that Washington must also lift sanctions on Iran’s Revolutionary Guards, a concession that was not part of the original agreement.

Simply put, Iran is overplaying its hand. This is in part because President Ebrahim Raisi’s ultra-hard-line regime, installed in August, seeks to extract a better deal for Iran than his predecessor, Hassan Rouhani, negotiated in 2015.

But a key factor motivating Iran’s diplomatic overreaching can be traced back to the Biden administration’s policy mistakes. Tehran was emboldened by the complacent posture adopted by the administration in not only ending the Trump administration’s “maximum pressure” sanctions strategy, but in condemning it as a failure and allowing sanctions to erode by turning a blind eye to Iran’s illicit oil exports to China.

Instead of rejecting Iran’s demand for whitewashing the Revolutionary Guards, the administration reportedly sought to tie that act of appeasement to a public Iranian promise not to attack American interests.

Soleimani’s successor, Gen. Esmail Gaani, in a speech commemorating the second anniversary of Soleimani’s death in January, threatened: “We will facilitate revenge on Americans in any place, even their own homes and by people close to them, even if we are not present.”

In addition to threatening U.S. officials, Iran also has launched cyberattacks at critical infrastructure inside the U.S. FBI Director Christopher Wray noted in a speech in Boston on Wednesday that the FBI had taken action to thwart an attempted Iranian government-sponsored cyberattack on Boston Children’s Hospital last year.

The hospital is one of the largest pediatric facilities in the United States, and the attack could have led to detrimental effects on services and capabilities. The FBI’s Boston field office was able to quickly respond to identify the threat and mitigate the impact on the hospital’s computer networks after receiving timely intelligence from a partner.

Wray observed it was “one of the most despicable cyberattacks I’ve ever seen.”

In 2021, Iran was identified by the U.S. government as launching disruptive cyberattacks against a range of U.S. companies, including transportation firms and health care providers. Microsoft security analysts warned in a November report that Iran’s capabilities have grown in recent years across a full range of cyberoperations.

The most recent annual threat assessment by the Office of the Director of National Intelligence detailed how Iran’s “growing expertise and willingness to conduct aggressive cyberoperations make it a major threat to the security of U.S. and allied networks and data,” and warned that “[r]ecent attacks on Israeli and U.S. targets show that Iran is more willing than before to target countries with stronger capabilities.”

Iran must be opposed, not appeased.

These complacent policies have emboldened Tehran to make maximalist demands at the nuclear talks in Vienna and take greater risks in orchestrating proxy attacks against U.S. military forces and allies in the Middle East.

After a year of mistakenly blaming the Trump administration—rather than Iran—for rising bilateral tensions, it’s time for the Biden administration to hold Iran’s hostile regime accountable for its violations of its commitments under the Nuclear Non-Proliferation Treaty Safeguards Agreement, terrorist attacks, proxy missile and drone attacks, and cyberattacks against the U.S. and its allies.

What We Know About DarkSide, the Russian Hacker Group That Just Wreaked Havoc on the East Coast