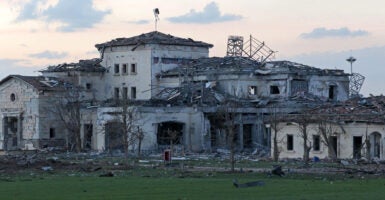 Iran launched at least a dozen ballistic missiles on March 13 that struck several buildings near a United States consulate compound being built outside the city of Erbil in northern Iraq. Pictured: A mansion damaged by the missile attack. (Photo: Safin Hamed/AFP/Getty Images)

Iran launched at least a dozen ballistic missiles on Sunday that struck several buildings near a United States consulate compound being built outside the city of Erbil, the capital of the autonomous Kurdish province in northern Iraq.

According the Department of Defense, there were no casualties and no damage to any U.S. facilities. But the attack represents a significant escalation for Iran in the lethal shadow war it has waged to expel U.S. military forces from Iraq and the broader region, as well as Iran’s conflict with Israel.

U.S. military advisers and other personnel stationed at Erbil’s international airport have in the past come under fire from rocket and drone attacks mounted by Iran-aligned militias, but such attacks were suspended in recent months as Iran sought to clinch a deal in Vienna to restore the 2015 nuclear deal.

Iran’s Islamic Revolutionary Guard Corps was quick to claim responsibility for the attack, unlike scores of previous attacks in Iraq that were launched by Iran’s Iraqi proxies, giving Tehran a degree of deniability.

The Revolutionary Guards released a statement that claimed the attack targeted a covert Israeli intelligence site, the “Strategic Center of Zionist Conspiracy and Evil.”

A pro-Iran Iraqi news outlet, Sabereen News, reported that the Iranian missiles targeted two secret Israeli intelligence bases in Erbil, and that the strike was ordered in retaliation for an Israeli airstrike that killed two Iranian Revolutionary Guards in Syria.

Sabereen News also noted that it was “not at all a coincidence” that the attack occurred around 1:30 a.m. local time, roughly the same time that Maj. Gen. Qassem Soleimani, the leader of the elite Quds Force of the Revolutionary Guards, was killed in Baghdad by a U.S. drone strike in January 2020.

Iran retaliated several days later with ballistic missile strikes on an American base in Iraq, injuring over 100 U.S. military personnel.

Iranian propaganda outlets noted that this time, Iran’s missile attack was a response to an Israeli airstrike in Syria in early March that killed two colonels in the Quds Force and two Syrian military officers. Shortly after that Israeli strike, the Revolutionary Guards vowed to seek revenge.

Although Iran has targeted Erbil for attacks before, this was the first time it was hit with ballistic missiles since Soleimani’s death.

The brazen acknowledgement of lobbing missiles at a heavily-populated civilian area, in violation of international law and Iraqi sovereignty, was a departure for Tehran, which often cloaks its attacks in the guise of actions by third parties.

According to Michael Knights, a security specialist at The Washington Institute for Near East Policy, most of the 12 short-range ballistic missiles, most likely Fateh-110s, that were launched from Iranian territory accurately struck a large villa owned by Baz Karim, a senior Kurdish businessman close to the leaders of the Kurdistan Democratic Party, the Barzani family. At least one missile hit the nearby Kurdistan24 television station, which is also owned by the Barzani family.

Iraqi Prime Minister Mustafa al Kadhimi visited the attacked site on Monday, and his government denounced the attack as a “violation of international law and norms” and summoned the Iranian ambassador to Baghdad in protest.

Although Kurdish and Iraqi leaders denied that Israel had established a presence on their territory, a U.S. official told The New York Times that the building targeted in the strike was an Israeli intelligence outpost and training facility.

Anonymous officials told The New York Times that the Iranian missile strike may be a reaction to an Israeli drone strike against Iran’s main manufacturing and storage plant for military drones, located near Kermanshah, Iran, on Feb. 12.

The Escalating ‘War Between the Wars’

Iran’s missile attack in Erbil is part of the intensifying shadow war between Iran and Israel, as well as part of Iran’s aggressive efforts to intimidate and coerce the U.S., Iraq, and the Kurdistan Regional Government.

Iran has waged a covert war against Israel for many years, operating through surrogates such as Hezbollah, Shia militias in Syria and Iraq, Palestine Islamic Jihad in Gaza, as well as through allies such as Hamas in Gaza and the Houthi Ansarallah movement in Yemen.

Iran exploited Syria’s civil war to prop up the Assad regime and entrench its Revolutionary Guards and Iran-controlled militias in Syria, where they opened up another front against Israel.

Israel, which has been targeted by 15 strikes by Iranian drones since 2018, has launched hundreds of airstrikes against Iranian forces and proxy militias in Syria, to prevent Iran from arming Hezbollah with advanced weapons and establishing permanent Iranian bases near Israel’s borders.

This murky regional conflict, known in Israel as the “war between the wars,” initially focused on Syria and Lebanon, but now has been expanded to include Iraq, Yemen, and covert maritime attacks.

Although Tehran insists that its missile attacks are designed as retaliation for previous Israeli attacks, Iran initiated the conflict with Israel, which it has vowed to destroy.

Iran also has launched shadow wars against the U.S., Iraq, Saudi Arabia, and the United Arab Emirates as well.

Iran’s latest missile attack marks a major escalation of its terrorist shadow war and a bad omen for the future.