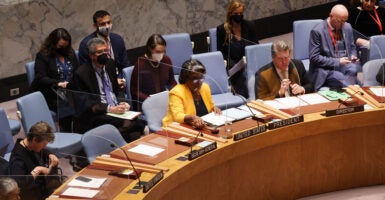 U.S. Ambassador to the United Nations Linda Thomas-Greenfield, center, takes part May 11 in a U.N. Security Council meeting on recent missile tests by North Korea. The U.S.' bid to toughen sanctions against Pyongyang after it carried out its 15th missile test this year was thwarted Thursday by Russia and China. (Photo: Spencer Platt/Getty Images)

U.S. Ambassador to the U.N. Linda Thomas-Greenfield proposed additional sanctions in response to North Korea’s spate of missile launches, which she characterized as “a grave threat to international peace and security.”

Thomas-Greenfield cited U.N. Security Council Resolution 2397, passed in December 2017, in which council members vowed to impose additional punitive measures if North Korea were to conduct another ICBM or nuclear test.

China and Russia have long been enablers of North Korean misbehavior. They acted as Pyongyang’s lawyer in the U.N. Security Council by vetoing or watering down proposed resolution texts, resisting stronger sanctions, and denying evidence of North Korea violations, blocking North Korean entities from being put on the sanctions list. Both countries only lackadaisically enforced sanctions for a limited time after a new U.N. resolution was approved.

Periodically, Beijing and Moscow would grudgingly accede to incrementally stronger U.N. resolutions after Pyongyang’s more egregious violations. However, strained international relations brought on by Moscow’s invasion of Ukraine and Beijing’s repeated encroachment on the sovereignty of its neighbors now hinder effective U.N. actions.

The Chinese and Russian veto will embolden North Korean leader Kim Jong Un to further belligerence. To date, North Korea has launched all of its ICBMs on a highly lofted trajectory so that they would not fly over Japan. The regime could instead choose to be even more provocative, by launching missiles over Japan, bracketing Guam with intermediate-range missiles (as it threatened to do in 2017), or demonstrating the ability of an ICBM reentry vehicle to reenter the earth’s atmosphere successfully after a lengthy flight.

However, the United States has repeatedly pulled its punches on enforcing its own laws. By treating law enforcement as a diplomatic tool to be bargained away or held in abeyance, Washington diminished pressure against North Korea’s nuclear and missile programs.

Over the years, Washington reversed U.S. Treasury Department sanctions on North Korean and Chinese entities, took no action against 12 Chinese banks that Congress assessed were committing money laundering crimes in the U.S. financial system, and even publicly announced it would refrain from punishing 300 North Korean entities violating U.S. laws.

The U.S. has sanctioned more Venezuelan and Syrian entities than those of North Korea.

Though stymied at the U.N. by Chinese and Russian obstructionism, the United States should lead an international effort to hold Pyongyang and other violators accountable and ensure sufficient defenses against the growing North Korean missile and nuclear threats.

The United States will find a willing partner in newly inaugurated South Korea President Yoon Suk Yeol, who has vowed to pursue a tougher policy against North Korea than his predecessor, Moon Jae-in.

Yoon can be expected to support sanctions enforcement more strongly, condition any benefits to North Korea on progress toward denuclearization, and place greater emphasis on strengthening the alliance with the U.S.

The U.S. has recently sanctioned small tranches of North Korea entities, but continues to refrain from actions against Chinese banks and businesses. Washington should move against all entities for which it has evidence of malfeasance.

The U.S. could impose billion-dollar fines on Chinese banks, as it did against European banks for money laundering for Iran, declare them as primary money laundering concerns, and freeze assets.