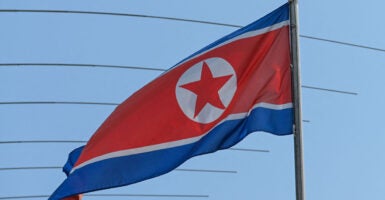 The Biden administration has completed its North Korea policy review, and will be unveiling the full policy position soon—likely after President Joe Biden’s meeting with South Korea’s President Moon Jae-in on May 21. (Photo: Sazali Ahmad/AFP/Getty Images)

The unveiling of the full policy position has been repeatedly teased as occurring in the near future. However, it might be expected to be postponed until after President Joe Biden meets with South Korea’s President Moon Jae-in on May 21.

Biden officials continue to make claims of a “new course,” different from those of previous administrations. However, there are only so many tools in the toolbox and only so many ways to build a policy house, so there will likely be greater continuity with previous approaches than depicted.

The new Biden policy rejects then-national security adviser John Bolton’s “Libya model,” which required North Korea to fully denuclearize before receiving any benefits. That proposal, however, was not the only policy proposal during the Trump administration.

Even Bolton and Pompeo, at times, made comments indicating that there would be some U.S. sanctions relief before complete North Korean denuclearization.

Some outside experts and pundits advocated abandoning complete denuclearization as a goal and instead adopting an arms control approach to accept a continued North Korean nuclear arsenal at a capped or reduced level.

The Biden administration continues to emphasize retaining “complete verifiable irreversible dismantlement/denuclearization”—known as CVID—of North Korea as the U.S. policy. The terminology is consistent with that of 11 U.N. resolutions as well as U.S. law.

The Asia Reassurance Initiative Act of 2018 declared that “it is the diplomatic strategy of the United States … to pursue diplomatic measures to achieve complete, verifiable, and irreversible denuclearization of North Korea.”

Trump administration officials claimed that terminology was the same as CVID, but never articulated why they had adopted a new term inconsistent with U.N. and U.S. legislation. The new term confused members of Congress and U.S. allies and was an unnecessary distraction.

Biden previously indicated he will return to the traditional U.S. “bottom up” approach of Republican and Democratic presidencies, which conditioned a summit meeting on significant progress by diplomats toward a denuclearization agreement.

The “top down” approach of the Trump administration was no more successful than previous efforts, but did test the hypothesis that a summit meeting between the U.S. and North Korean leaders could resolve long-standing differences.

A Biden official quoted in The Washington Post article asserts, “We fully intend to maintain sanctions pressure while this plays out.” However, the degree to which sanctions and U.S. laws will actually be enforced remains an open question.

The Bush, Obama, and Trump administrations all claimed strong enforcement, but held back on imposing sanctions against entities violating U.S. laws.

The Biden administration emphasized that it will return to a firmer U.S. policy against North Korean human rights violations. A tangible indication would be to appoint a special envoy for North Korea human rights issues, a congressionally mandated position that remained vacant during the four years of the Trump administration.

The regime may respond by conducting another major provocation such as a nuclear or missile test. Doing so would put the Biden administration’s policy to an early test.