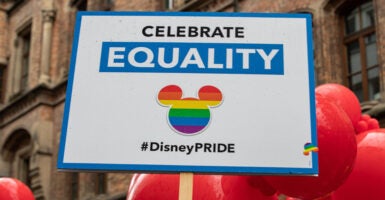 Disney, and much of corporate America, has jumped in on left-wing cultural causes. (Photo: Alexander Pohl/NurPhoto/Getty Images)

If one was to create a test to evaluate how corporate America treats freedom of speech and religious liberty, how well do you think they would do?

A pair of organizations just released such a test and, perhaps to no one’s surprise, the corporations didn’t do well.

If assigned by letter grade, most companies received an “F.”

The newly released Viewpoint Diversity Score was created by a partnership between Alliance Defending Freedom, a First Amendment legal organization that focuses on religious liberty, and Inspire Insight, which is a Christian financial technology firm.

The Viewpoint Diversity Score is used in an accompanying business index that tracks significant Fortune 1000 companies.

Alliance Defending Freedom senior counsel Jeremy Tedesco and CEO of Inspire Insight Robert Netzly wrote an article in The Wall Street Journal announcing the launch of the score and index.

They wrote that the score “gauges U.S. corporations’ respect for religious and ideological diversity in the market, workplace, and public square.”

It does this by evaluating businesses in three categories, “market, workplace, and public square.” The index uses voluntary disclosure data along with donations, reports, and news releases to make the evaluation. The score is created by applying this information to a 42-question rubric that gives zero to three points depending on how well the company respects free speech and freedom of religion.

The typical company scored closer to 0% than even 50%. The average score was 12%.

Some industries did particularly poorly.

“The two industries with the lowest overall scores were computer software at 6%, and internet services and retailing at 8%,” the Viewpoint Diversity Score website noted. “The financial and data services industry also came in at a low overall average score of 11%.”

This bodes ill for the future of freedom in this country.

“People and organizations shouldn’t have to fear that they will be censored online, lose access to their bank accounts, or denied other services because of their religious or political views,” Tedesco and Netzly wrote.

There was a time when a business would just be a business and would try to sell its products to Americans of all backgrounds and political beliefs.

Much of big business has been commandeered by the hard left and is driving a wedge between Americans. It’s creating a toxic environment that’s poisoning our civil harmony.

So, how do we restore some element of neutrality in the way that corporate America works?

The problem is twofold.

First, customers now must navigate an environment in which businesses aren’t just opposed to their beliefs but are actively hostile and working against them. As we’ve seen with increasing regularity, big businesses, almost in lockstep, have thrown their weight behind far-left political causes.

The second issue is that it’s becoming difficult for employees to dissent from left-wing orthodoxy. Is it possible to be a Republican or anywhere on the political right in corporate America?

The answer is increasingly, “no.”

We are getting closer to living on a vast, national college campus where radicals can destroy anyone at any moment with almost total institutional compliance.

Speech codes and speech policing are replacing the culture of free speech. Big business, especially Big Tech, has been all too eager to engage in censoring anything that isn’t a “mainstream,” left-wing view.

However, as much as big business has jumped onto this runaway train in recent years, there are signs that corporate wokeness is in retreat or has at least been blunted. From Disney, to Netflix, to Exxon Mobile, we’ve seen companies jump headfirst into culture war debate then either do an about-face or go silent after public backlash.

It turns out that frequent tantrums by woke employees engaging in walkouts every time they are offended isn’t good for business. Neither is angering half of your customers.

And sometimes woke capital comes across someone they shouldn’t have messed with, like Florida Gov. Ron DeSantis.

In the 21st century, the danger to American liberty isn’t just coming from government, it’s coming from the institutions controlled by our woke ruling class. Big business has allowed itself to become an arm of the cultural revolution.

Turning this around will take vast internal and external pressure. Information that will inform and keep them accountable is a vital element in keeping the free market free.