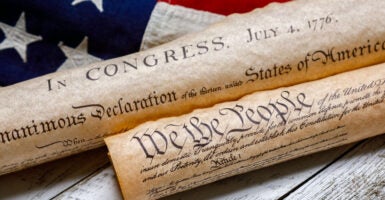 The Founders faced the formidable task of creating a government that could operate effectively while respecting and protecting the liberties for which the Revolution had been fought. (Photo: Eurobanks/iStock/Getty Images Plus)

The American republic was created by a remarkable generation of men who turned a rebellion against the British crown into a transforming moment in human history, one based on the revolutionary proposition that all men are created equal and are endowed by their Creator with fundamental rights that no government has the moral authority to set aside.

On achieving independence, however, the Founders faced the formidable task of creating a government that could operate effectively while respecting and protecting the liberties for which the Revolution had been fought.

In doing so, they had no illusions about human nature, the one constant in human affairs. They understood that the drive to accumulate power, whether by an individual despot or a parliamentary majority, is the historic enemy of individual freedom.

So, they incorporated two safeguards into the Constitution: the separation of governmental powers, with its checks on potential abuses, and the principle of federalism underscored by the 10th Amendment’s command that all powers not assigned to the federal government be “reserved to the States respectively or to the people.”

Upon taking office, members of Congress must “solemnly swear” that they “will support and defend the Constitution of the United States against all enemies, foreign and domestic,” and “bear true faith and allegiance to the same.”

During our first 180-odd years, Washington largely respected the Constitution’s safeguards. But with the advent of President Lyndon Johnson’s Great Society, Congress began a wholesale assumption of the states’ responsibilities.

As I explained in my book “Saving Congress from Itself,” Congress has done that through a proliferation of federal programs that offer states grants of money for purposes that are the states’ exclusive concern with instructions governing how the money is to be spent.

An avalanche of regulation-ridden programs now provide federal subsidies for virtually every activity in which states are engaged.

Although the states are not obliged to accept federal grants, experience has demonstrated that, politically, it’s virtually impossible to decline “free money” from Washington, however onerous the attached conditions.

As a consequence, the states have become administrators of programs created in Washington and overseen by bureaucrats the furthest removed from where the money is to be spent.

Regrettably, the result has been the effective nullification of the 10th Amendment.

The Constitution provides that “All legislative Powers herein granted shall be vested in a Congress of the United States.” Congress is the sole legitimate source of federal laws.

Congress, however, has developed the habit of enacting legislation for the achievement of broadly defined objectives, while delegating the responsibility for writing the rules for their achievement to executive branch agencies.

That habit has led to the creation of an extraconstitutional administrative state in which unelected officials both write and administer the regulations that now govern ever-wider areas of American life—regulations that have the force of law.

Procedures exist for subjecting proposed regulations to scrutiny before they can take effect. But the administrative state can sidestep them by simply writing letters, as it did when, without a hearing, it advised schools that boys must be allowed to use girls bathrooms if they think of themselves as girls.

The state gets away with such excesses because they have become so common that they are rarely challenged.

Federalism today is just a memory, but beginning its restoration is simple.

Congress just has to strip the grants of federal regulations telling the states how the money is to be used. This simple reform would allow accountable state and local officials—rather than distant bureaucrats—to determine how best to meet state and local needs.

Unfortunately, simple can be difficult. Restoring the Constitution’s allocation of governmental powers will be a difficult task.

As James Madison noted in Federalist Paper 48, the Constitution’s “parchment barriers” can’t prevent the executive and legislative branches from ignoring its safeguards. Only an informed citizenry can do that.

Unfortunately, over the past generation, our educators have abdicated their responsibility to ground their students in the fundamentals of the American experience.

Too many Americans now suffer from a peculiar form of historical amnesia. They remember all our past sins, such as slavery. But too few have a sufficient awareness of the constitutional and economic principles that, on the historical record, had made ours the most productive, prosperous, innovative, generous, and free society the world had known—principles responsible for the freedoms and material well-being they take for granted.

I used the past tense there because, thanks to our development as an administrative state, we are no longer the freest.

The challenge to preserve our republic has always been with us. It now faces an unprecedented threat. As Benjamin Franklin reminded us at the close of the Constitutional Convention, while the Framers had given us a republic, it would be up to us to “keep it.”

It’s essential that Americans grasp the significance of the threats to which they are being exposed by Congress’ abandonment of the Constitution’s most important safeguards.