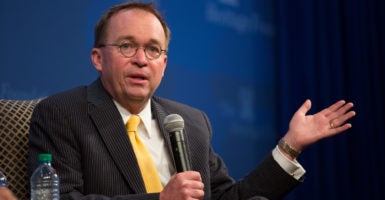 As polarized as politics might seem to have become, both sides seem to agree on one thing that advantages conservatives, acting White House chief of staff Mick Mulvaney says.

“You’ve got an audience of people who say, ‘OK, [the federal] government doesn’t work,’” Mulvaney said Wednesday at a Heritage Foundation forum on federalism.

The event, “Restoring Federalism: Giving Power Back to the States,” featured Mulvaney and other Trump administration officials. Federalism is a system of government in which the states form a unity, but remain independent in their own affairs.

“One of the benefits … of this politicization of the culture is that young people are paying a lot more attention to government than they used to, at a much earlier age than they used to,” Mulvaney said in a question-and-answer-format discussion with Heritage Foundation President Kay Coles James.

“Some will say it doesn’t work, and it favors the rich,” Mulvaney continued. “But if you ask young people, ‘Give me a list of things that government, writ large, does extraordinarily well,’ it’s a fairly short list.

The left and the right could potentially unite around a distrust of government, Mulvaney said.

“Once you can bridge that gap, and explain to people there is another way, there’s an alternative to big government, I think they would be open-minded to it, because the government they have, so many people are disappointed with,” he said.

He acknowledged the president supports giving more power to the states, not based on an academic theory rooted in conservative ideology, but because of firsthand experience struggling with federal red tape as a businessman prior to running for president.

“We are moving forward with a 50-state solution to [corporate average fuel economy] standards, which is what we should be doing, that will be out later this summer or early fall. It will be out this year,” Wheeler said.

The EPA announced last week it would issue new rules to reverse the 2016 Obama administration regulations that doubled penalties on automakers not meeting the corporate average fuel economy—or CAFE—standards.

A section of the Clean Water Act allows a state to veto certain interstate projects that could affect that state’s water quality. New York Gov. Andrew Cuomo is blocking a pipeline through New York that was meant to deliver natural gas to New England.

“He doesn’t want the fossil fuels to be used. What he’s doing, though, is subjecting New England to use further imports of Russian natural gas,” Wheeler said.

He noted that the United States “produces our natural gas in a more environmentally conscious manner than anywhere else in the world.”

“Russia is not trying to reduce their methane emissions, and they do not use environmentally sound practices in producing their natural gas,” the EPA chief said. “If you are concerned about what Gov. Cuomo says he’s concerned about, on climate change, then you have to look at the carbon footprint and transporting natural gas from Russia to New England.”

Trump has promoted federalism in his budget proposals, by seeking $2.7 trillion in spending reductions and reining in the federal government, noted Russ Vought, acting director of the Office of Management and Budget.

“When we talk about Washington having a spending problem—and it does, $22 trillion in debt, trillion-dollar deficits as far as the eye can see,” Vought said, “We all know … our revenues are at historical averages. Our spending is not. We have a spending problem in Washington, D.C., but it’s a federalism problem.”

By that, Vought meant that much of the federal spending goes toward programs better handled at the state and local level, adding:

What happens is that the federal government is doing things outside what the Constitution would have us be doing. That means that states, in some respects, don’t have the need to figure out whether they should be doing something more effectively, with their knowledge of their voters, their constituents.

Sometimes, that can lead to poor incentives, where Washington uses the hook of federal spending to change behaviors that the people of that state or locality would otherwise not be supportive of.