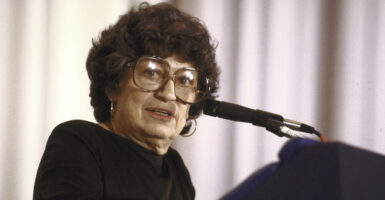 While President Jimmy Carter decried the state of the nation in his infamous crisis-of-confidence speech in 1979, Midge was the spearhead of a new generation of leaders, thinkers, and doers who paved the way for Ronald Reagan, making conservatism a mainstream movement in modern America.

Unbowed by the hammer blows of failure in war, the battering of stagflation and long gas lines, Midge declared it was time to begin the fight for America’s future.

“By going to cultural war and taking no prisoners,” she once wrote, “we seem to have made far more noise in the world than our sheer numbers would have suggested.”

Boy, did she make a difference. She not only helped set the stage for the Reagan Revolution, she remains an icon for contemporary conservatives.

Midge Decter’s legacy is that it is always time to fight the good fight.

When Midge died Monday at age 95, there were more than a few memorials noting her career as one of the pioneering conservative women of letters, a prolific journalist, writer, lecturer, and author.

Midge Decter was so much more. She was a warrior of ideas who challenged, inspired, and fired up so many.

Midge was a long-serving trustee of The Heritage Foundation. For much of my career at Heritage, I never knew a professional life in policymaking without her guiding presence. Even after she stepped down after 30 years on the board, she never felt far away. Her voice was always relevant.

Midge also was, of course, the wife of conservative magazine editor and commentator Norman Podhoretz, who survives her; among their three children is writer and critic John Podhoretz. In 2012, Midge and Norman both received Heritage’s highest honor, the Clare Boothe Luce Award. Her other awards included the National Humanities Medal, bestowed by President George W. Bush in 2003.

“Liberty has lost a great thinker and a great champion,” wrote Ed Feulner, the former longtime president of Heritage, at the news of her death.

But has it?  I don’t think so—because of what Midge stood for. Her passions spanned social issues, national security, and the economy—all the important forces that determine our freedom, safety, and prosperity.

Midge was a champion of women’s rights before progressives made the issue the first fashion of woke. “She stood for freedom like few other women of her generation,” Feulner recalled.

Equality was about the principal of liberty, not an excuse to advance a partisan progressive agenda and what she called, generating no little controversy, “a kind of legal onslaught against men.”

She was one of the most articulate defenders of peace through strength and the reasoned, prudent course of protecting America by ensuring the nation could defend itself and its interests.

Midge defended free enterprise. “In the end you cannot defend American democracy without defending the economic system that is its necessary underpinning,” she wrote.

All these ideas are relevant to modern conservatism today, the determination to offer a party for working-class Americans, to put the interest of Americans first, protect our liberties, shrink the power of big government, and stop Washington’s fiscal insanity.

All conservatives ought to care about all the important issues that impact our lives and livelihood. We ought not to be afraid of debating them, disagreeing, and speaking our mind. It was that brave freedom of thought that made Midge Decter a powerhouse of the American right and a model for our times.

To this day, I always hear Midge’s voice reminding me: “Get out there and fight for what’s right.”