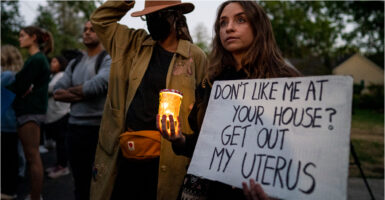 Pro-abortion activists are staging protests outside the homes of the Supreme Court’s conservative justices, including this one Monday evening at Samuel Alito's house in Northern Virginia. (Photo: Kent Nishimura/Los Angeles Times/Getty Images)

It’s against the law to intimidate a Supreme Court justice in an effort to persuade him or her to rule a certain way. But that hasn’t stopped some abortion activists from marching to the homes of the high court’s conservative justices to demand that Roe v. Wade stand.

On Monday, the pro-abortion group Ruth Sent Us organized a demonstration in front of Justice Samuel Alito’s home, and on Wednesday, protesters visited the homes of all six conservative justices, including Amy Coney Barrett.

The protests come in response to the leak of Alito’s draft majority opinion in the case of Dobbs v. Jackson Women’s Health Organization. That opinion, if finalized, would overturn Roe v. Wade, the 1973 case that legalized abortion on demand across the country.

On today’s edition of “Problematic Women” we discuss what it’s like at the scene of these protests and why the First Amendment doesn’t give anyone the right to intimidate judges or justices.

Also on today’s show, we cover YouTube’s censoring of a speech by former President Donald Trump. Plus, food shortages continue to create challenges for Americans.

And as always, we’ll crown our Problematic Woman of the Week.