A Critical Pillar of Defending and Helping Ukraine: Civil Society 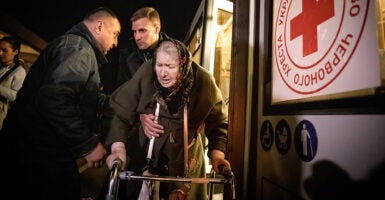 Ukraine’s civil society—civilians, churches, and private sector—has been courageously standing up volunteer efforts against Russia and “disproving [Russian President Vladimir] Putin’s claim that Ukraine isn’t a real nation.” Pictured: Volunteers assist an elderly woman getting off a bus after she was evacuated from Mariupol to Zaporizhia on May 8, 2022. The Red Cross has assisted with the evacuation of civilians from Russian-controlled regions in Ukraine. (Photo: Alex Chan Tsz Yuk, SOPA Images, LightRocket/Getty Images)

Since Russian President Vladimir Putin’s invasion on Feb. 24, Ukraine has proven to be a country that, despite all odds, unambiguously demonstrates incredible societal resilience during an unprovoked war. Indeed, as a recent Wall Street Journal article succinctly put it, “Civil society is Ukraine’s secret weapon against Russia.”

Ukraine’s civilians, churches, nongovernmental organizations, many in the private sector, and its allies have been courageously standing up against Russia and “disproving Putin’s claim that Ukraine isn’t a real nation,” according to the Journal.

As the Journal article underscored,

[Ukraine] has a strong civil society. … Ukrainians responded with volunteer efforts that have made important contributions to the country’s defense. … Ukrainians have spent the past eight years strengthening their ability to govern themselves, and a vibrant civil society is proving to be a significant advantage in the war against Russia.

But it’s not just Ukraine’s civil society that’s critical in this fight; it’s help from the civil societies of nations throughout the world that’s crucial to defending Ukraine and helping its people survive and ultimately recover from this tragedy.

As Russia’s war of aggression continues to cause a massive humanitarian disaster, the stakes are high in Ukraine and beyond, with freedom on the line. It is indispensable for America and its allies to work with a network of civil society members to deliver the most practical and effective assistance to the Ukrainian people as quickly and efficiently as possible.

As is widely reported, private citizens in Poland and other Ukrainian neighbors such as Moldova and Romania not only have taken in refugee families but also have delivered food and other needed items directly to Ukraine. This informal network has been a true representation of civil society in action.

One of countless such cases is the work of Poland’s Marcin Nowacki.

Nowacki, a leading voice promoting market-oriented reforms as vice president of the Union of Entrepreneurs and Employers in Poland, has organized a small but very rapidly responding humanitarian convoy, along with other nonprofit organizations.

Nowacki was the recipient of The Heritage Foundation’s 2022 Steven M. Sass Economic Freedom Award, which was established in 2020 to recognize and encourage individuals and organizations that contribute to promoting free-market principles and policies (The Daily Signal is the news and opinion outlet of The Heritage Foundation). He described the convoy during his recent award presentation:

The purpose of the trip was to provide medicines, medical and hygienic materials. Equipped with two full buses, we went to the place indicated by the Ukrainian side, which packs and distributes products to places where there are the greatest needs. …

Lviv is currently a transfer and logistics center supporting central and eastern Ukraine. At the outskirts of the city, we met our guide who led us to the logistics center. A team of people was waiting there, and they immediately started unloading. All products were sorted immediately after unloading and properly described. Process management is at the highest level. … It is worth adding that the inhabitants of Lviv stay at their homes and support the accommodation, catering, and transport of refugees from areas affected by an unauthorized attack by Russia. … On our way back from Ukraine, we had the honor of transporting people evacuating from Ukraine.

Sharing some of the key recommendations and the needs he had observed, Nowacki further underscored that with the current crisis and the need to help Ukraine being unprecedented in the modern history of Europe, “Here it is necessary to involve us—civil society” from many countries around the world. Nowacki is now organizing additional convoys on an ongoing basis.

Indeed, a countless number of notable private responses from civil society such as Nowacki’s have been crucial in aiding Ukraine while the sudden exodus of millions of Ukrainians into neighboring countries and beyond has overwhelmed European authorities.

In that regard, it is worth highlighting an important observation from a recent Heritage Foundation policy paper: “[Ukraine’s] churches, nongovernmental organizations, and their American partners give the United States an opportunity to avoid the failed aid models of the past and to ensure that American generosity reaches the Ukrainian people quickly and efficiently.”

It is certainly in the best interest of the United States and its allies to direct much-needed humanitarian assistance to Ukraine through faith-based and other civil society networks as much as possible.

And now is certainly the time to act.