The Last Thing We Need Is Biden’s Thought Police Bureau 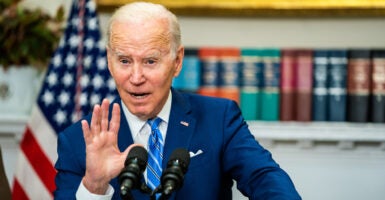 President Joe Biden’s bad idea factory just belched out a doozy: The Disinformation Governance Board rolled off the assembly line to the sound of shrieks and Klaxons—and deservedly so.

The last thing American citizens need is a taxpayer-funded thought police bureau that monitors public utterances, condemns them as “disinformation,” and then flags them for dutiful erasure by the Democrat left’s social media henchpersons in Silicon Valley.

This wretched concept echoes the mind control of the USSR. Indeed, these bumbling neo-totalitarians gave this monstrosity a name whose acronym is DGB, which rhymes with KGB. One feels sorry for Team Biden—almost.

It would be bad enough if the DGB were a small, stand-alone panel, a la the National Endowment for the Arts. Instead, the DGB operates within the U.S. Department of Homeland Security, a massive law enforcement agency with ample guns, ammo, and well-trained federal agents whose firepower would inspire the average enemy of the state to clam up.

“The fact that a federal department with approximately 240,000 employees would set up a ‘Disinformation Governance Board’ to enforce the government’s judgement of what information is allowed in the public square should frighten anyone who values liberty and understands how crucial free speech is in maintaining that liberty,” Sen. Ron Johnson, R-Wis., told the Daily Caller.

Biden, the Democrats, and their DGB lack the constitutional authority to scream, “Disinformation!” and make the news and commentary that they dislike disappear. But this sure looks like what they are salivating to do.

This is especially rich given Democrats’ penchant for peddling disinformation.

—Former President Barack Obama declared publicly 37 times during the Obamacare debate: “If you like your plan, you can keep your plan, period.” Obama knew this was disinformation. If your employer disliked your plan, you could have lost it, period. PolitiFact declared this its 2013 “Lie of the Year.”

—According to Biden, Republicans want to “figure out how to keep the black vote, when it occurs, from even counting.” No, Joe. Republicans are not trying to stop the tabulation of black voters’ ballots.

—Biden claimed that Georgia’s new election integrity law is “going to end voting at 5 o’clock when working people are just getting off work.” No, Joe. Polls will close at 7 p.m. The Washington Post awarded Biden a maximum four Pinocchios for this disinformation.

Biden also scored four Pinocchios for each of these outbursts of disinformation:

—President Donald Trump planned to have Social Security “permanently depleted by the middle of calendar year 2023.”

—Because of the Second Amendment, “you couldn’t buy a cannon.”

—At least five times, Biden falsely has said, “I was arrested” as a teenager while protesting for civil rights.

—For his part, Secretary of Homeland Security Alejandro Mayorkas, the man who unveiled the DGB, bizarrely insists: “The border is closed.” This disinformation is belied by the Center for Immigration Studies’ estimate that 620,000 illegal alien “got-aways” have evaded the Border Patrol and penetrated the U.S. under Biden. Their whereabouts? Unknown.

Disinformation czarista Nina Jankowicz is just the right person to sniff out disinformation, since she practices it herself.

—Conversely, Jankowicz disinformed that Hunter Biden’s “laptop is a Russian influence op.” The first son’s “laptop from Hell,” in fact, contains authentic proof of his dodgy deals around the world.

Given that top Democrats have mastered the disinformation that they decry, the DGB should be re-christened the Ministry of Psychological Projection.