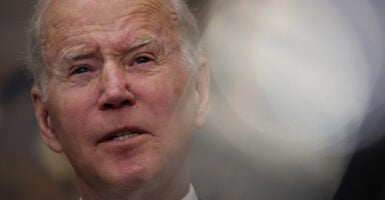 President Joe Biden snuck unlawful immigration benefits for hundreds of thousands of Ukrainians and Russians into a $33 billion Ukraine aid package—paid for by taxpayers and at the expense of those waiting years to properly immigrate to the U.S. Pictured: Biden speaks during an event at the White House, May 4, 2022. (Photo: Alex Wong/Getty Images)

President Joe Biden recently sent an emergency supplemental funding request to Congress for $33 billion in aid to Ukraine. However, the administration used the opportunity to sneak in unlawful immigration benefits for hundreds of thousands of Ukrainian, Afghan, and Russian immigrants—paid for by the American people and at the expense of lawful applicants who have been waiting years to properly immigrate to the U.S.

The emergency request includes $1.2 billion for the Department of Health and Human Services with a nod to the Department of Homeland Security’s Uniting for Ukraine program. This portion of the funding request includes robust and increased blanket immigration provisions for Ukrainians, Afghans, and Russians in the science, technology, engineering, and math—or STEM—fields.

One of the most curious categories mentioned is the Russian STEM professionals. With the ongoing conflict in Ukraine, it is surprising that the administration believes it will “benefit” U.S. national security interests to peel back employer-sponsor requirements and expedite an unlimited number of applications from this foreign adversary.

Normally, these Russian nationals would be subject to visa caps that would limit the number allowed to enter the U.S. each year. This certainly seems like the Biden administration’s latest radical, opportunistic attempt to get around those caps one country at a time. And to start with Russia is just national security incompetence.

As far as refugees from Ukraine are concerned, of course, they are trying to escape a terrible crisis, and we should absolutely support the country’s efforts to combat Russia’s invasion. However, that does not mean that Biden or his Department of Homeland Security should get a free pass to once again disregard our nation’s immigration laws.

Just as the Biden administration did with Afghan evacuees, it is wildly abusing the humanitarian parole system for Ukrainians.

Humanitarian parole allows people who might not normally be eligible for admission into the United States to be in the U.S. for a temporary period for urgent humanitarian reasons. Parole was always meant to be used rarely, with strict grounds of inadmissibility in mind, on a case-by-case basis, and for a temporary period of time. Not so under the Biden and other Democrat administrations.

Biden’s funding request also specifically states that Ukrainian nationals will be eligible for parole and the associated benefits even after a September 2023 deadline if they are found to be a “parent, legal guardian, or primary caregiver of an individual who is determined to be an unaccompanied child.”

This will in effect encourage some parents, guardians, or even anyone loosely deemed a “caregiver” to endanger children and send them to the U.S. unaccompanied so they have a way of coming over later.

These provisions set forth by the administration do not only circumvent U.S. law and set dangerous precedents, they are also not the best solution for those they purport to help.

Encouraging a large group of Ukrainian citizens who are not otherwise eligible to live in the U.S. to travel halfway around the world instead of taking temporary refuge in a neighboring country to Ukraine hardly makes sense.

European Union nations have offered Ukrainians up to three years of residence with “access to employment and social welfare.” This enables them to easily return to Ukraine when they feel it is safe, and over a million people have already done just that. This solution is a far more logical, truly humanitarian option for citizens of Ukraine and will help to ensure that people can go back to rebuild their country when the fighting ends.

Biden’s supplemental request additionally includes opportunistic provisions placing Afghans on an expedited pathway to citizenship through green cards. With close to 80,000 largely unvetted Afghans having been evacuated to the U.S. in mid-2021 due to Biden’s abrupt departure from their country, we can only imagine how much worse of a strain on the system this will create.

Of course, strain on the system and a dismantling of the laws in place is exactly what Biden and his administration’s open-borders activists want. This emergency funding request is a clear effort to pack in as many new, unlawful immigration benefits as possible where Americans may not immediately expect to find them.

With the Biden border crisis at the southern border continuing full speed ahead, it’s well past time for the Biden administration to do something—anything—that actually follows the law and alleviates the intense pressure on our immigration system and our communities.

Since the administration seems unlikely to do anything like that, Congress would be prudent to carefully review this emergency funding request and reject the president’s attempts to increase unlawful immigration.