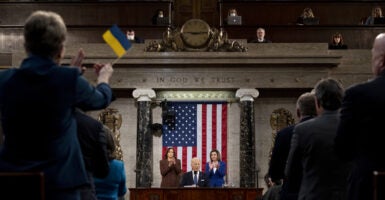 Congress should carefully evaluate President Joe Biden’s request for a $33 billion supplemental spending package to provide additional aid to Ukraine. Pictured: A member of the U.S. Congress waives a Ukrainian flag as Biden delivers the State of the Union address to a joint session of Congress in the U.S. Capitol House Chamber on March 1. (Photo: Saul Loeb/Pool/Getty Images)

These funds would follow the $13.6 billion appropriated in March as well as the $6.4 billion in security assistance provided since 2014.

While the human impact of Russia’s invasion of Ukraine is moving, and further U.S. support for Ukraine to defend itself is warranted, it is vital that Congress carefully evaluate Biden’s request and ensure that any legislation is responsibly crafted. Members should insist on these points in particular:

Any New Spending Must Be Offset

Current federal spending is already unsustainable. Congress recently passed a $1.5 trillion omnibus appropriations spending bill, and Biden released a budget proposal with reckless levels of spending that would increase the national debt by 50% in just 10 years.

Americans are already suffering under inflation not seen in four decades. Higher government spending financed by printing by the Federal Reserve will further add to inflationary pressures.

If they believe that additional funding for Ukraine is warranted, then Congress and Biden should identify the lower-priority programs in this year’s $5.5 trillion budget that will be cut to pay for the new spending.

The Heritage Foundation’s Budget Blueprint includes more than 200 policy reforms to roll back excessive government spending and prioritize taxpayer dollars, including more than $170 billion in efficiencies in the defense and international affairs budgets.

Congress is also considering a separate supplemental spending package that would spend $10 billion on COVID-19 vaccines, testing, and treatments in response to an earlier request from the Biden administration.

Biden urged Congress to combine the Ukraine aid to this COVID-19 spending package, a move supported by some Senate Democrats.

After two years and trillions in inflationary government spending in response to COVID-19, it’s time to return to normal.

If additional funding for Ukraine is warranted, it should be considered on its own merits and not be loaded up with other policy issues. Any legislation should be targeted and directly related to Russia’s invasion of Ukraine.

More than 20% of Biden’s request, $7.5 billion, is to provide liquidity and general support to the government of Ukraine. This includes paying the salaries and pensions of Ukrainian government employees.

According to media sources, Treasury Secretary Janet Yellen has said that the U.S. government would provide resources to Ukraine to “cover the government’s widening budget gap, which Ukrainian officials estimate could total $8 billion this month alone.”

The U.S. government’s budget deficit is projected to be $1.2 trillion this year ($1.4 trillion if Biden’s budget is enacted)—meaning that Yellen’s Treasury Department must deal with adding $8 billion to our budget deficit every 2.5 days on average.

As a result of government overspending and other harmful government policies, Americans are suffering from 8.5% inflation and a shrinking economy. American taxpayers cannot afford the bureaucrats in the American government, much less bankrolling the Ukrainian government employee pensions at the same time.

Ex-Im Subsidies Must Be Rejected

The Export-Import Bank is a bastion of taxpayer-backed corporate welfare for big corporations.

Under current law, if more than 2% of the loans backed by the Ex-Im Bank default, its lending cap is frozen to ensure further losses are contained.

The Biden administration is requesting that the Ex-Im Bank’s default rate cap be doubled to 4% because its “outstanding exposure is at significant risk due to the global sanctions levied against Russia.”

Congress should reject this request, which would put taxpayers on the hook for bailouts, and serious questions should be asked about why the Ex-Im Bank is so financially exposed to Russia.

The whole world has been moved by the resistance of the Ukrainian people against Russian aggression. The American people have generously supplied significant levels of funding and supplies to support Ukraine.

But, tragedy must not be an excuse for policymakers to abandon prudence and their responsibilities to the American people. Rather, sober analysis and adherence to principle is all the more necessary in trying times.

Biden has requested another large aid spending package for Ukraine. Congress should carefully review the proposed supplemental spending and ensure that any legislation is responsibly constructed.