Ignore the Rhetoric: The Ex-Im Bank Is Risky and Inefficient 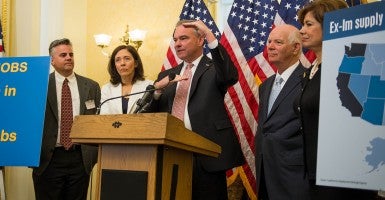 The most successful lobbyists in the nation’s capital are masters of masquerading propaganda as fact. Repeat even outright falsehoods with a modicum of conviction, and they start to sound like truth. So be forewarned: claims about the manifold small-business benefits of the Export-Import Bank of the United States are simply fictitious.

Until recently, few Americans had ever heard of “Ex-Im,” which funnels billions of taxpayer dollars each year to overseas businesses for the purchase of American products. Whether to reauthorize the bank’s charter, which expires Sept. 30, is now the subject of intense debate in Congress.

Proponents claim that such taxpayer bankrolling supports jobs and fills “gaps” in private financing. In fact, the bank is a conduit for corporate welfare that primarily benefits multi-national corporations, the top 10 of which profited from 75 percent of Ex-Im financing in FY2013. These major beneficiaries include Boeing ($91 billion market capitalization); General Electric ($267 billion); Bechtel (2013 revenues: $39.4 billion); and Caterpillar (2013 sales and revenues: $55 billion).

It’s tough to convince Congress or the public that such titans of industry can’t manage to access private financing, especially when more than 98 percent of all U.S. exports receive no Ex-Im subsidies. Consequently, proponents are painting the bank as the salvation of small business.

In fact, Ex-Im provides export financing for about one-half of 1 percent of America’s small businesses, according to calculations by Mercatus Center economist Veronique de Rugy. The fraction of smaller businesses that do receive aid is artificially inflated by the bank’s expansive definition of “small,” which includes firms with as many as 1,500 workers, as well companies with revenues of up to $21.5 million annually. Even the bank’s own annual report shows it consistently fails to achieve the congressionally required level of authorizations for small businesses.

Proponents claim that financing deals for multinational corporations benefit the small businesses that operate as suppliers. That assumes that the economic activity subsidized by Ex-Im would not occur absent bank financing. But U.S. exports hit a record-high $2.2 trillion in 2013, up from $1.4 trillion five years ago, reflecting no shortage of private export capital. Moreover, several of the largest beneficiaries operate financing subsidiaries of their own.

Finance costs are only one among a variety of factors that affect a foreign purchaser’s choice of supplier. Availability, reliability and stability all play significant parts in purchase decisions. U.S. firms are certainly capable of competing successfully without corporate welfare.

To the extent that Ex–Im does finance deals that the private sector supposedly snubs, taxpayers are justified in questioning whether they should be saddled with risk that private investors deem unacceptable. It is also difficult to reconcile bank officials’ assertions that they alone assist higher-risk exporters but still manage to offer competitive rates and generate profits.

In some cases, Ex–Im financing actually puts small businesses and U.S. workers at a disadvantage by providing overseas competitors with billions of dollars in financing at artificially low rates. Recently, for example, the bank approved $694 million in financing for U.S. equipment to develop an open-pit iron ore mine in Australia (owned by the country’s richest woman). The deal was consummated despite warnings from the United Steel Workers, the Iron Mining Association, and all four senators from Minnesota and Michigan that the subsidies would jeopardize thousands of U.S. mining jobs.

The closer the expiration deadline nears, the more insistent will advocates’ claims become that Ex–Im is necessary for small business and a sound “investment” for taxpayers. The facts say otherwise.

In reality, the bank is little more than a conduit for corporate welfare. Although a select group of American businesses do profit from the subsidies, their good fortune is not what’s best for the nation as a whole. Rather than recommit to the government’s risky and inefficient finance scheme, lawmakers should focus on reducing tax and regulatory barriers to exports.