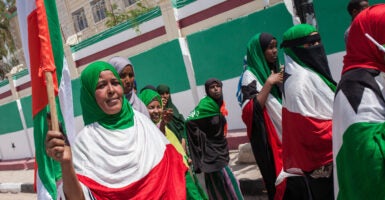 Women wrapped in Somaliland flags take part in celebrations of the 27th anniversary of the self-declared independence of Somaliland in the capital, Hargeisa, on May 15, 2018. (Photo: Mustafa Saeed/AFP/Getty Images)

Salon.com ran a piece recently warning that the American right is “waging a stealth, neocolonial assault on Somalia.” The supposed “assault” is a growing campaign within the U.S. and elsewhere to recognize Somaliland’s independence from Somalia.

The author, Mohamoud Gaildon, included as evidence a report that I wrote back in October.

Gaildon’s piece is an opportunity to examine several common claims made by Somali irredentists opposed to Somaliland’s independence. The first is the idea that foreigners—and, apparently even worse, American men—are trying to dismember Somalia:

Today, men in Washington—and they are once again almost all men—are working to decide the fate of Somalis … . [They are] hellbent on reordering Africa as they see fit. For them, Somalia is fair game, a guinea pig, something to be altered with the stroke of a pen.

The ubiquity of this argument doesn’t make it any less specious. The truth is that the growing international movement to recognize Somaliland’s independence exists only because of Somaliland’s decadesold decision to separate itself from Somalia.

It is Somalilanders, and no one else, who have split themselves from Somalia, just as the Eritreans did from Ethiopia in 1991, and the South Sudanese did from Sudan in 2019. I’m sure Gaildon didn’t begrudge the Eritreans and South Sudanese their countries, or decry the U.S.’ recognition of them as a “stealth, neocolonial assault.”

Next up is Gaildon’s notion that Somaliland’s insufficiencies are disqualifying. The bill he refers to here is the bipartisan Somaliland Partnership Act:

Their bill paints a rosy picture of Somaliland and calls for much closer U.S. engagement with it. This bill relies on a combination of faulty and incomplete information. (The Freedom House report cited above says that Somaliland ‘has seen a consistent erosion of political rights and civic space,’ with minority clans subject to ‘political and economic marginalization’ and a serious social problem of violence against women.)

Somaliland does indeed have democratic (and other) flaws, as I noted in my report. The U.S. must be clear-eyed about the problems and encourage Somaliland to tackle them.

Yet, it’s a strange notion that because Somaliland has shortcomings, it should be forced to remain in a paper union with Somalia, a country so dysfunctional it was the most infamous failed state on the planet for two decades.

In fact, Freedom House in its latest 2022 report rates Somalia as “not free” with a score of 7 out of 100. That’s the 12th-worst ranking in the world, inferior to basket cases like Yemen, Belarus, and Afghanistan, and tied with Saudi Arabia. (Somalia did eke out a narrow win over North Korea, however.)

Somaliland, meanwhile, was rated “partly free” with a score of 49. If Somaliland’s insufficiencies disqualify it from independence, then Somalia has much less of a case for nationhood.

The final claim to examine is the central one of Gaildon’s piece:

The persistent claim by the leaders of Somaliland that it is a de facto country in full control of its ‘territory’ is not true: The two communities through whose territory the presumed border of separation runs are staunchly against Somaliland’s secession.

Without the consent of these two communities (the [Warsengali] and Dhulbahante tribes), Somaliland’s secession cannot be a reality on the ground, as [Idaho Republican Sen. Jim Risch’s] bill claims it already is.

The fact that there are unionists concentrated in the Warsengali and Dhulbahante clans is not evidence that the Somaliland government lacks control of its territory—every country has groups that disagree with government policy. What matters is effective, on-the-ground authority.

Somaliland does have a border dispute with the Somali state of Puntland that, because of clan ties, claims parts of Somaliland’s territory in which the Warsengali and Dhulbahante live. Both clans have in the past also fought with Somaliland for control of the area.

Yet the authority of Hargeisa, Somaliland’s capital, over the region has grown steadily. Now, according to the scholar Michael Rubin of the American Enterprise Institute think tank, who recently traveled to parts of the contested area, it appears to extend all the way to the border that Somaliland claims. Somaliland also routinely conducts state functions such as elections in the contested areas, where its currency is also widely accepted.

Puntland’s claims also breach the standard for determining borders that African countries themselves set. The Organization of African Unity, the precursor to today’s African Union, vowed in 1964 to recognize only those borders “existing on [member states’] achievement of national independence.” Somaliland claims the territory of the colonial-era British Protectorate, but Puntland wishes to ignore the decadesold African consensus on borders by insisting on new ones that did not exist during colonial times.

Another of Gaildon’s errors is that he presumes a unanimity of opposition to independence among the Warsengali and Dhulbahante, for which there is no evidence.

The sentiment is difficult to gauge, and the best data is 20 years old. Nonetheless, during Somaliland’s 2001 referendum—which the international observer mission reported was overwhelmingly perceived by Somalilanders as a vote on independence, and which passed with 97% of the vote—the highest percentage of “no” votes in any region was only 16%. Voters who were opposed may have abstained from the vote, and turnout was indeed significantly lower in opposition areas, but it still registered at 35%, even in the most ardently unionist area of Somaliland.

Furthermore, clan elders in the contested regions have in the past reportedly contemplated switching their allegiance from Puntland to Somaliland, suggesting their affinity for their clan brethren in Puntland is not as ardent as some claim.

Finally, while Somaliland should do what it reasonably can to assuage unionist concerns, the reality of living in a democracy is that the groups that win elections—and multiple international observer missions have deemed Somaliland’s vote credible—get to set a country’s direction.

Until unionists prevail in a vote, it’s not unfair that they are prevented from determining Hargeisa’s policy on independence.

No matter what irredentists may claim, Somaliland is the only credible government authority within its borders. Those boundaries also comport with the standards for legitimate borders that African states established 60 years ago.

Furthermore, it is Somalilanders and no one else who began the movement for independence decades ago and constructed a government far more democratic and effective than the one in Mogadishu.

Reciting these facts is not a “neocolonial assault.” It’s a simple acknowledgment of reality.