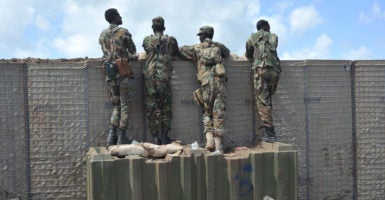 The fight against al-Shabaab has ground into a stalemate. Pictured: Somali soldiers on patrol June 13, 2018, at Sanguuni military base, about 280 miles south of Mogadishu. (Photo: Mohamed Abdiwahab/AFP/Getty Images)

In the early hours of Jan. 5, the al-Qaeda-affiliated terrorist group al-Shabaab attacked a joint Kenyan-American military base in Manda Bay, Kenya, where several hundred American troops and military contractors live and work.

The U.S. confirmed that three Americans—one serviceman and two contractors—were killed, several others injured, and some aircraft damaged.

Al-Shabaab operates primarily in Somalia. It rose to prominence in 2006, and at one point controlled swathes of the country. But its frequent attacks against neighboring states prompted an offensive by the multinational peacekeeping force, the African Union Mission in Somalia, which drove al-Shabaab from most of its strongholds.

Since then, the fight against al-Shabaab has ground into a stalemate. The multinational peacekeeping force has too few troops to hold liberated areas and continue the offensive, and the Somalia National Army, despite years of training and investment by many countries, is too ineffectual to pick up the slack.

Al-Shabaab controls parts of southern Somalia, derives tens of millions of dollars yearly through extortion, and launches devastating raids in many parts of the country, including the capital, Mogadishu.

It is in this context that the group attacked the Manda Bay base. The U.S. uses Camp Simba, as the base is also known, to launch surveillance aircraft, which may have been the target of the attack, and to train Kenyan forces fighting al-Shabaab in Somalia. The terrorist group is active in the area, and its desire and capacity to hit Camp Simba is unsurprising.

What is surprising is that the group was able to penetrate the base’s perimeter before being repulsed by Kenyan and American forces. Al-Shabaab has a high-end skill set and has overrun a number of adversaries’ military bases over the years, and in such a dangerous area the U.S. should have anticipated a capable assault from the group at some point.

Soon after the attack, the Department of Defense announced it was deploying elements of the East Africa Response Force to strengthen the base.

The attack also highlights a growing challenge for America’s Somalia policy. Suppressing al-Shabaab for the long term will require the Somali government to deliver competent enough governance to persuade Somalis to resist or at least not acquiesce to al-Shabaab.

Yet the government so far has embroiled itself in a series of political squabbles, especially with its constituent federal member states, over power sharing, rather than focusing on the staggering challenges the country faces.

American and others’ military strikes currently keep al-Shabaab mostly at bay, but the window of opportunity that has given the Somali government will not remain open forever.

Washington needs to continuously monitor whether Mogadishu is making sufficient progress to warrant further support. Indefinitely backing a government that never will be legitimate in Somalis’ eyes would distract the U.S. from supporting other possible solutions there and give the government little reason to improve.

For now, the U.S. should continue aiding Mogadishu as al-Shabaab has not fully recovered from its losses years ago, meaning there is still an opportunity for the federal government to do better.

Washington must ensure Mogadishu clearly understands the progress the U.S. expects and hold it accountable if it fails. Otherwise, the U.S. and its regional allies will have to continue fending off deadly attacks from al-Shabaab into the foreseeable future.