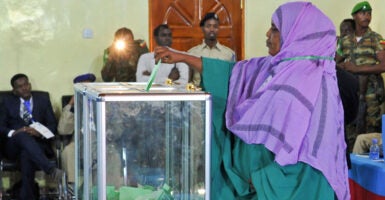 Having experienced several delays, it is becoming clear that Somalia's election process has not improved since the nation's flawed 2016-17 election. Pictured: A member of the Parliament votes for Somalia's autonomous South West State president in Baidoa, Somalia, on Dec. 19, 2018. (Photo: Mohamed Abdiwahab/AFP/Getty Images)

Joseph McAndrew is a student at the George Washington University and a former member of the Young Leaders Program at The Heritage Foundation.

“I wouldn’t call this an election … this is a selection.”

So said Halima Ibrahim, head of Somalia’s National Independent Elections Commission, about the electoral process in Somalia that will culminate—perhaps next month—with parliament selecting a president.

While we must wait until the process completes to pass judgment, Ibrahim’s observation is a reminder that the Somali government—despite strong international support—has failed so far to improve upon the last, flawed “selection” in 2016-17.

This year’s exercise may even represent a regression.

As with Somalia’s 2016-17 electoral process, the parliamentary elections have been several times delayed, and are now scheduled to begin next month. The delay, as it did last time, led to parliament extra-constitutionally extending its term, which expired in December.

Although there is no realistic alternative to the extension, the recurring disregard for the constitution could lead to further tension and political stalemate.

The delay is partly due to the long-troublesome relationship between the states and the federal government, demonstrating what precious little progress has been made on healing this toxic dynamic.

The latest dispute centers on the demands of two Somali states, Jubbaland and Puntland, that federal forces be removed from Jubbaland before they will participate in the process. The government has refused, and recently announced it would proceed without the two states if necessary.

The federal government is also again insisting that Somaliland, the northern breakaway region that has been de facto independent for three decades, participates in the national system.

Somaliland prohibits its people from engaging in the electoral process, so the election of its federal parliamentarians—who will not actually represent anyone living in Somaliland—must be done in Mogadishu.

It is not just half the states that may sit out the process. Many of the opposition presidential candidates are threatening to do the same. They accuse incumbent President Mohamed Farmajo of stuffing the elections commission with cronies, and say they will boycott the process unless the commission is reconstituted.

While the authorities have expanded the number of Somalis who will be involved in this electoral process, they have also limited participation by doubling the registration fees that candidates must pay. The fee is prohibitively expensive for most Somalis, and eliminates all but the elite from contesting for a seat.

Finally, despite years of assurances that a one person, one vote system was forthcoming, authorities rubbished the idea in September. The assurances were always fantastical, given the extreme unlikelihood of degrading the Somali Islamist terrorist group al-Shabaab enough to hold voting in the areas it controls. Yet it is still another broken promise.

Instead, authorities resurrected and tweaked the previous, convoluted model of indirect elections that favor Somalia’s four dominant clans, which are essentially large extended families that are the principle ordering mechanism of Somali society.

This indirect system diminishes representation for the many minority clan members, and provides extensive opportunities for corruption. The 2016-17 process was mired by vote-buying and ineffective oversight. It is almost certain that this electoral process will take a similar course.

The electoral process is an opportunity to assess whether the U.S.-backed government in Mogadishu is evolving into a legitimate, competent government that can stabilize Somalia and suppress al-Shabaab. If it is not, American support will be wasted or even counterproductive, propping up a regime that provokes widespread popular opposition and crowds out alternative solutions.

That is not happening yet. Somalia is undeniably in better shape today than it has been for decades. So far, there is no widespread violent opposition to the government—though the alienation of the states and opposition politicians from Mogadishu could lead in this direction—or widespread support for al-Shabaab. That suggests there is still a chance for Mogadishu to stabilize the country, and that it is still worthwhile for the U.S. to try to help.

However, the fact that many of the same failings that contaminated the previous electoral process continue to dog the current one is worrisome. The government’s lack of progress in this key area suggests it is not making quick or substantive enough headway toward becoming the long-term solution Somalia needs.