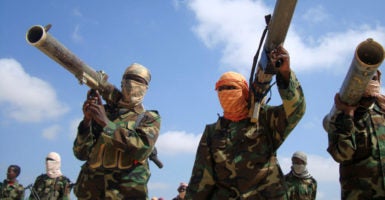 Jack Armstrong is a member of the Young Leaders Program at The Heritage Foundation.

The Kenyan Defense Forces have been deployed in Somalia conducting counterterror operations since 2011.

Yet a recent United Nations report accuses the Kenyans of continuing their yearslong practice of enabling the trade of charcoal in Somalia—a trade banned by the U.N. in 2012 because it profits al-Shabab, the Islamist terror group with which Kenya is ironically locked in a bitter struggle.

Since its rise to prominence in 2006, al-Shabab (an al-Qaeda affiliate) has launched hundreds of attacks inside Somalia, earning the State Department’s designation as a terror organization in 2008. In October 2017, it launched one of the deadliest terror attacks in history when two of its truck bombs killed more than 500 people in Somalia’s capital city, Mogadishu.

The group also frequently attacks nearby Kenya, perpetrating some of the worst massacres the country has ever suffered. Its seizure of the upscale Westgate Mall in Nairobi in September 2013 led to nearly 70 deaths and almost totally destroyed the mall.

In 2015, the group killed 147 people—mostly students—at Garissa University in eastern Kenya. The group has also kidnapped Kenyans and foreign citizens alike from Kenya and attacked humanitarian aid workers around the Dadaab refugee camp.

In response to al-Shabab’s growing power, the African Union in 2007 established a multinational peacekeeping force in Somalia, known as AMISOM, to try to roll back al-Shabab’s territorial control and stabilize the region. After invading Somalia in October 2011 in its own campaign against al-Shabab, Kenya merged its forces in Somalia with AMISOM the following year.

AMISOM succeeded in expelling al-Shabab from all its major strongholds, though the group still controls significant territory in southern Somalia. Kenyan forces also liberated the port of Kismayo, one of Somalia’s largest ports for exporting charcoal. Some believed the city’s capture would be a lethal blow to al-Shabab given its financial reliance on the port.

That was not the case, however.

Instead of enforcing the U.N. ban on the charcoal trade, Kenyan forces allegedly allow it to continue in exchange for its own slice of the action. The Kenyans charge about $2 a bag, and may make as much as $12 million a year from the arrangement.

The Kenyan forces’ cupidity allows al-Shabab to rake in charcoal profits. The U.N. conservatively estimates that the terror group makes approximately $10 million dollars a year from the 4.5 million to 6 million bags of charcoal exported annually. Al-Shabab benefits primarily by taxing vehicles ferrying charcoal to port cities such as Kismayo for export.

The fight against al-Shabab is already difficult enough given the Somali government’s corruption and dysfunction, and its lack of progress in creating an effective Somali national army. Kenyan forces’ refusal to enforce the charcoal ban only makes the fight harder, and the money they reap comes at the cost of both Kenyan and Somali lives.