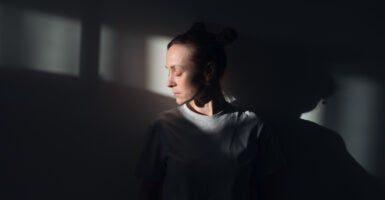 Under woke policies, bad actors need only to identify as the opposite sex to gain access to private spaces—even in jails and prisons. (Photo illustration: Aleksandr Zubkov/Getty Images)

A male inmate housed in a women’s facility at New York’s Rikers Island jail has been sentenced to seven years for raping a female prisoner.

Blount was housed in the female section of Rikers Island in February 2021, when a 33-year-old female inmate said she was raped in a bathroom after taking a shower.

On top of the seven-year sentence announced Monday, Blount must register as a sex offender.

It’s true that Rikers Island is notorious for being unusually violent, and that violence escalated in 2021. But this particular sexual assault may not have happened if facilities that house criminals did so based on biological sex, not the gender with which they criminals presumably identify. A female inmate in Illinois says this exact scenario happened to her in 2020.

For the past few years, jail and prison facilities such as Rikers Island have been under tremendous pressure to bend to a vocal minority and house male prisoners who identify as female with women.

In New York in 2020, Steuben County officials agreed to “sweeping changes to its jail and prison policies” after settling a discrimination lawsuit filed by a transgender inmate.

At the time, the ACLU in New York hailed the settlement as one that “establishes one of the strongest jail or prison policies in the country protecting the rights of transgender, gender-nonconforming, nonbinary, and intersex people in custody.”

This is happening in California, too. In 2020, Gov. Gavin Newsom, a Democrat, signed legislation known as SB 132, which allows male prisoners who identify as female to be transferred, by a simple request, to a facility for women.

Now, women are pushing back to preserve their right to safety and privacy.

The Women’s Liberation Front, which seeks to protect the privacy and equality of women, filed a lawsuit in federal court arguing that California’s SB 132 is unconstitutional and creates an unsafe environment for women, for whom these single-sex facilities exist.

One plaintiff in the suit says she was sexually assaulted by an inmate who transferred from a men’s facility. Another plaintiff says she was inappropriately “grabbed.”

One of the biggest reasons that so many conservatives oppose the Equality Act before Congress is that it would open the door to this, and similar situations, nationwide. And few laws would be left to protect the most vulnerable.

Under the Equality Act, any place that receives federal funds, from schools to prisons, would be forced to banish single-sex spaces or be liable to discrimination charges.

It’s important to make clear: Most trans-identifying individuals aren’t perverts or assailants-in-waiting. But under these policies, bad actors need only to identify as the opposite sex to gain access to private spaces.

In Alaska, a man claiming to be a woman tried to enter a shelter for battered women. When he was refused, he sued the organization for discrimination under a local law governing sexual orientation and gender identity.

Women serving time in prison or jail still deserve to be treated humanely and with respect. They still have a right to privacy and safety.

But, intimidated by a vocal minority, local politicians and officials have buckled under new definitions of sex and gender, showing they are more worried about being sued for discrimination by  criminals trying to take advantage of women, than being sued for an assault such as rape.

Discrimination policies should not trump safety and privacy, whether in school or prison.