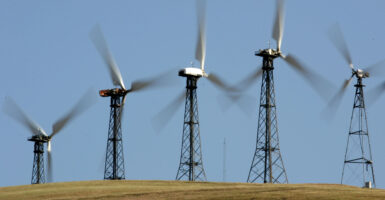 “Except for shutting down turbines, there is no way to prevent eagle deaths from wind blades,” wildlife biologist Jim Wiegand says. Pictured: A row of wind turbines operates May 16, 2007, at the Altamont Pass wind farm in Livermore, California. (Photo: Justin Sullivan/Getty Images)

Earth Day came and went April 22 without self-described environmentalists and their allies in the media devoting much, if any, attention to the deleterious effects of wind power on wildlife habitats, especially for eagles.

There’s nothing on the official Earth Day website, which identifies itself, in part, as “the world’s largest recruiter to the environmental movement, working with more than 150,000 partners in over 192 countries.”

No mention here either of the environmental fallout from wind turbines in what The Washington Post identifies as “the best stories” from its climate journalists over the past year. They certainly had ample time.

First off: Wind power comes with pros and cons, like all other energy technologies and resources.

Politicians, however, routinely distort the cost-benefit analysis of choosing wind over another energy source. They’ve propped up wind with subsidies and been dishonest and deceptive about the environmental costs of wind. Eagle deaths are one cost; excessive land use is another.

Wind enjoys a political sheen of “green,” especially on Earth Day, but there’s far more to the story.

The idea that green energy isn’t exactly environmentally friendly, in addition to being economically unsound, doesn’t fit with the Earth Day narrative. That narrative largely is built around the virtues of so-called renewable energy, such as wind and solar.

In a report for The Heritage Foundation last fall on the life cycles of energy sources, visiting fellow Andrew Wheeler, who was administrator of the Environmental Protection Agency from 2019 to 2021, wrote:

Without a full understanding or debate of the issues, decisions made today will create the environmental problems of tomorrow. … Today, the Biden administration and Congress are working overtime to incentivize the use of renewable sources, yet they are not proposing solutions to deal with the renewable waste.

ESI Energy pleaded guilty to three counts of violating the Migratory Bird Treaty Act based on “documented deaths of golden eagles due to blunt force trauma,” according to a Justice Department press release. That trauma, the agency said, was the result of “being struck by a wind turbine blade at a particular facility in Wyoming or New Mexico, where ESI had not applied for the necessary permits.”

ESI Energy “acknowledged that at least 150 bald and golden eagles have died in total since 2012, across 50 of its 154 wind energy facilities,” the Justice Department release says, with 136 of those avian casualties “attributable to the eagle being struck by a wind turbine blade.”

A court ordered ESI Energy to pay $27 million during a five-year probation to support initiatives designed to minimize the deaths of eagles.

The company also will pay over $1.8 million as part of a plea agreement and more than $6.2 million in restitution. That sounds severe, but Wiegand says he is skeptical these efforts will make an appreciable difference.

“Except for shutting down turbines, there is no way to prevent eagle deaths from wind blades,” the wildlife biologist observes at the blog Master Resource, a platform for discussion of energy policy, adding:

This industry and the U.S. Fish and Wildlife Service (USFWS) are very aware of this because wind turbines have been annihilating eagles for decades. It’s an open secret that the American Wind Industry Association now has danced around for a decade or more.

Given the time and history behind us since the first Earth Day in 1970, it’s fair to ask what the opportunity cost has been for the dire predictions of catastrophe that never materialized, versus the time and effort that could have been spent addressing genuine challenges.

“Its history is littered with slogans, speeches and grand pronouncements—but not with many environmental improvements,” Lassman writes in an op-ed published by The Tribune-Democrat in Johnstown, Pennsylvania. “Each year Earth Day gets its share of pageantry and more than a little propaganda. It’s time to let it rest.”

A little history is in order regarding wind turbines.

Wiegand has spent years calling attention to the connection between the wind industry and avian mortality at the Altamont Pass in Northern California. He would like to know “where the true environmentalists are in this debate,” the wildlife biologist says.

In a recent post, Master Resource carefully dissects and dismantles the association’s arguments. Back in 2011, the wind group acknowledged that Altamont Pass “has a far higher rate of golden eagle losses than any other U.S. wind farm.” But it also pointed to “exhaustive studies” indicating no discernable impact on the breeding population.

Master Resource expresses skepticism about this claim, while raising questions pertinent to the relationship between the wind lobby, government agencies, and efforts to discourage other studies.

Again, conservatives don’t need to come out swinging at wind energy as a technology. However, they certainly should swing hard against policies and politicians that distort electricity markets and obscure real costs.

It’s not just the bird population that is victimized by Big Wind, by the way. The federal production tax credit for wind power got a 13th extension last year from Congress, further exacerbating costs to taxpayers.

As an added insult, taxpayers effectively are subsidizing damage to the very wildlife habitats that Earth Day activists supposedly champion.