Despite Failed History of Energy Tax Credits, Some in Congress Push for More 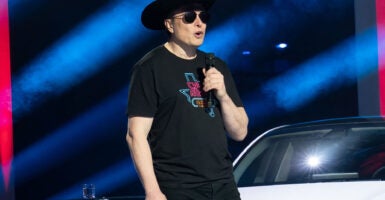 The White House and some in Congress are reportedly testing the waters to see what energy tax carveouts might be salvageable from President Joe Biden’s multitrillion-dollar spending package, the Build Back Better Act, which fell apart last winter.

Democrats are laboring to reframe the energy price crisis as an argument for increasing taxpayer spending on wind and solar power, and electric vehicles.

It’s just another misdiagnosis of the problem and, consequently, a misguided prescription for the high energy prices Americans are paying.

Even worse, these tax favors have been tried before and failed.

Carbon capture has long been documented to be an inefficient, costly method to reduce carbon dioxide emissions that has already cost federal taxpayers more than $1 billion in failed Department of Energy projects.

Despite that, American taxpayers can expect to shoulder the burden for more than $20 billion in tax credits for carbon capture companies over the next decade.

Take a look also at tax credits for electric vehicles. A 2019 Congressional Research Service report found that half of the tax credits went to corporations.

Even Elon Musk, the CEO of the most successful electric vehicle company in the world, said in regard to tax subsidies that “the incentives give us a relative disadvantage.”

“Tesla has succeeded in spite of the incentives, not because of them,” he said.

Whether for carbon capture or EVs, tax credits do little to drive innovation in the sector, but rather allow wealthy Americans and businesses to save billions of dollars on the backs of hardworking Americans who foot the bill for the virtue signaling.

Tax credits, by design, prop up and favor less-efficient businesses to encourage investors to shift resources away from more efficient and productive companies.

Funneling tax breaks to politically preferred businesses and technologies only increases barriers to entry for unsubsidized companies to compete for investors and customers—ultimately doing more to hinder innovation than advance it.

But the pain doesn’t stop there.

Even if Congress did the right thing today and let all the existing energy tax credits expire, American taxpayers would still be shouldering a heavier tax burden for many years to come.

When the expiration date to qualify for energy tax breaks comes, many of these policies are designed to allow companies and individuals to access tax breaks for a full decade thereafter. This “expiration” only prevents new beneficiaries from accessing them and does not inhibit current users from continuing to use those credits for years to come.

The Treasury Department estimates that the additional tax burden to Americans for covering existing energy tax breaks totals more than $100 billion over the next decade. That’s a tax burden Americans will have to make up for elsewhere.

Removing tax credits would simplify the tax code, allowing business to have a more consistent and predictable road map to success.

To avoid increasing the overall amount of tax collections, the eliminated tax credits should be offset with tax cuts, whether that’s a reduction in tax rates, an expansion of pro-growth expensing provisions, or something else.

Eliminating all energy subsidies would also let American businesses innovate without the government’s “help” that so frequently comes in the form of politicians telling families and businesses what they should build and buy.

American businesses have innovated without the government’s “help” for generations and will continue to do so, just so long as the government does not get in the way.

There are few opportunities to solve two problems at once. In this case, there is the opportunity for much-needed fiscal reform while also improving energy policy.

The elimination of narrow tax preferences that make businesses dependent on government is a win-win situation that any administration or Congress should be eager to implement.

Have an opinion about this article? To sound off, please email letters@DailySignal.com, and we’ll consider publishing your edited remarks in our regular “We Hear You” feature. Remember to include the url or headline of the article plus your name and town and/or state.