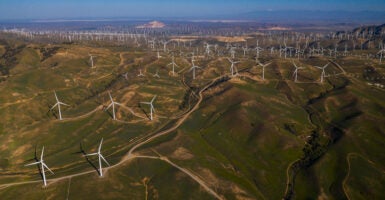 Taxpayer-backed research and development, demonstration, and commercialization of alternative energy sources are often rife with potential for cronyism, and might not align with actual market needs and preferences. Pictured: Windmills produce renewable energy in the Mojave Desert outside of Lancaster, California. (Photo: Universal Images Group/Getty Images)

Committees in the House and Senate are scheduled Thursday to hold hearings on energy innovation.

The hearings come in the wake of the American Jobs Plan and the Biden administration’s budget, including massive proposals for taxpayer-backed research, development, demonstration, and commercialization, particularly for energy technologies.

While there is a role for the federal government, additional context around the state of research and development in the U.S. should inject a dash of humility about how much taxpayer-backed resources contribute. It also suggests where more government attention could be focused.

The Bloomberg Innovation Index ranks the U.S. as sixth for most innovative countries, behind South Korea in first place and ahead of China in 22nd place. Of the six categories measured (R & D, manufacturing, high-tech companies, education, research personnel, and patents), the U.S.’ worst ranking is in education at 34th.

The National Science Foundation regularly tracks trends of where research and development is conducted and funded in the U.S. and abroad. Its January 2020 report, covering R & D through 2017, showed that:

The Biden administration presents a discouraging account of the state of R & D in the U.S., and consequently proposes a major increase in taxpayer spending as an easy fix for innovation in the U.S. The president’s proposed budget and infrastructure plan would direct hundreds of billions of dollars to existing and new programs.

The problem with this is how shortsighted it is.

One-off subsidies for the industries and companies that government thinks are the future last only as long as the lifetime of the government program.

Taxpayer-backed research and development, demonstration, and commercialization also are rife with potential for cronyism, might not align with actual market needs and preferences, and build new barriers to entry for companies that do not—or choose not to—meet the parameters of the government’s programs.

Even worse, such exorbitant spending will contribute to the long-term debt problem American taxpayers are facing.

The reality is, while money is critical, you can’t buy a culture of innovation.

As billionaire venture capitalist Jim Breyer told Bloomberg, “I’ve had dozens of meetings over the years with leaders from around the world who asked how they can build their own Silicon Valley. It never works.”

What’s needed is a love for innovation and experimentation—a “magic” that money can’t buy.

Rather than further burdening taxpayers, a more sustainable, long-term government approach to energy innovation in the U.S. would be for policymakers to craft policies that make the U.S. a more inviting, dynamic ecosystem for innovation and a competitive country to do business and invest in, and export from.

For example, Congress could remove barriers to energy innovation and reduce costs of R & D through competitive, pro-growth, and generally available tax policies that remove disincentives for companies to invest in infrastructure and innovation.

Immediate expensing of short-lived assets, such as investments in machinery and tools, begins to phase out in 2022, and expensing of research and development investments expires after 2021.

Those provisions should be made permanent and expanded to include longer-lived investments in structures such as new manufacturing space.

Instead of compounding the number of federal labs and research institutions as proposed by the American Jobs Plan, Congress and the existing labs could make bold changes to ferret out the inefficiencies, duplicative regulations, overlapping missions and capabilities, and the micromanagement across existing government labs that make it difficult for the private sector to engage with them.

The pandemic and government responses to it at the federal, state, and local levels also revealed many areas where regulatory barriers were stifling creativity, innovation, and access to capital and labor.

Congress should reevaluate policies that drive up the costs of labor in the U.S., remove barriers to capital formation, make sense of export regulations and trade barriers, and ferret out byzantine permitting regulations and other approvals required at the federal, state, and local levels that kill ideas from ever getting their legs under them.

These are the kind of issues that Congress, the Biden administration, and state governors and policymakers should be looking into, rather than rushing to spend billions of tax dollars.