Elon Musk Buys Twitter. Will He Bring Back Banned Users? 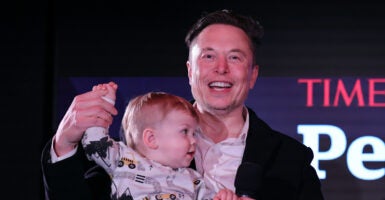 Now that billionaire Elon Musk has purchased Twitter, will banned users be able to rejoin the social media platform? Pictured: Musk and his son on stage during Time magazine's "Person of the Year" event Dec. 13, 2021, in New York City. (Photo: Theo Wargo/Getty Images)

Twitter suspended the account of The Babylon Bee, a conservative parody site, for posting a story calling the Department of Health and Human Services’ Adm. Rachel Levine, a biological male who identifies as female, a man.

It also banned other accounts, including those of Turning Point USA founder and Executive Director Charlie Kirk and The Christian Post news site, for calling the HHS official a man.

Free speech is the bedrock of a functioning democracy, and Twitter is the digital town square where matters vital to the future of humanity are debated. I also want to make Twitter better than ever by enhancing the product with new features, making the algorithms open source to increase trust, defeating the spam bots, and authenticating all humans. Twitter has tremendous potential—I look forward to working with the company and the community of users to unlock it.

Musk added: “I hope that even my worst critics remain on Twitter, because that is what free speech means.”

Conservatives increasingly have said the social media company singles them out for punitive actions.

Musk’s purchase produced speculation about whether and when users whom the platform previously banned or censored, including former President Donald Trump, might be able to return.

Canadian feminist Meghan Murphy said she hopes she can return. Twitter banned Murphy permanently from Twitter after she referred to Jessica Yaniv, a biological male who identifies as a woman, as a man.

Murphy had replied to an image of Yaniv by tweeting: “Yeeeah it’s him.”

In a written statement Monday to The Daily Signal, Murphy said: “Elon Musk buying Twitter has shown these would-be totalitarians they don’t have as much power as they thought, and also that their game is not the only one in town.”

Twitter punished me for speaking out about an issue a minority of activists and ideologues wish to stifle debate on, and then publicly libeled me in an attempt to defend their decision. I hope Elon’s move frees all of those who were censored and banned unfairly and for political reasons.

Texas Attorney General Ken Paxton was among those weighing in on the announcement.

Paxton had responded to an article in USA Today that referred to Levine as woman of the year by saying, “Rachel Levine is a man.”

Although Twitter didn’t ban Paxton, it marked that tweet and two subsequent statements about Levine with warning labels and locked them so they couldn’t be retweeted, liked, or commented upon.

In a written statement to The Daily Signal, Paxton said: “I look forward to seeing Musk and Twitter address the rampant and deeply entrenched anti-conservative bias their platform has long exhibited and am confident this will allow for more effective and productive discourse in the future.”

Twitter, which launched in 2006, has about 206 million daily users worldwide.