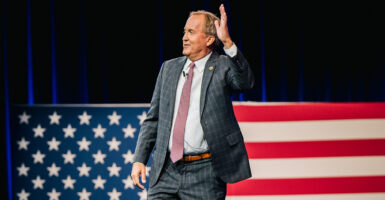 Texas Attorney General Ken Paxton is making it his mission to protect the children of his state from transgender ideology. Pictured: Paxton thanks the crowd July 11 after a speech at the Conservative Political Action Conference at the Hilton Anatole in Dallas. (Photo: Brandon Bell/Getty Images)

Paxton is in the middle of a battle to protect children from a radical left that wants to corrupt them.

Paxton joins “The Daily Signal Podcast” to discuss his efforts to protect Texas’ children, as well as investigations of popular social media site TikTok and a lawsuit against Meta/Facebook over privacy concerns.

Also on this episode, Sen. Mike Braun, R-Ind., sits down with us to discuss the confining dangers of Obamacare and the perils of government-enforced mandates.

Listen to the podcast below or read a lightly edited transcript.

Doug Blair: My guest today is Ken Paxton, attorney general for the state of Texas. Ken, welcome to the show.

Ken Paxton: Hey, thanks for having me. Great day, huh?

Blair: Absolutely. Yeah, no, it’s a wonderful day. So much energy here. It’s great. But I want to start with a legal opinion that you just released surrounding transgenderism and children. In your opinion you discuss puberty blockers and hormone therapies, and you call this a form of child abuse. Could you go into a little bit more about why you believe it’s child abuse?

Paxton: Yeah, this is Texas law. I mean, my job is not to make Texas law, it is, if I get asked a question, which I did by a legislator, then we did our research to make sure we came back with the right answer. And the answer is clear. If you’re going to sterilize a child, whether it’s through some type of chemical process or whether it’s through some physical process, that’s child abuse in Texas. It’s not legal.

These children have the right to make their own decision when they become the age of majority. Most of the time that’s 21 in Texas. These are serious consequences that last forever. And so, clearly, under Texas law, at least right now, that’s the law.

Blair: So what are some of the steps that Texas is taking to protect children from what you’ve called child abuse?

Paxton: Yeah. I think the governor ordered our family organizations to basically go out and make sure that they are protecting children, making sure they’re aware of this ruling. And I’m hopeful that what we put out there will be good guidance for our state government so that parents can’t do this to their children. Sometimes it’s one parent, sometimes it’s two parents. But in the end, this should be the child’s choice when they can make this decision at an older age.

Blair: Have you received any feedback from parents saying this is a good step, this is where we should be going?

Paxton: Yeah. Most parents have been pleased with this. You know, I’m very much a fan of parental rights and parents being able to make decisions for their kids about their education, about their health. But when you’re talking about a decision that is life-altering that could be made later—and I think the studies indicate that this is a problem when children make this decision. When the decision’s made too young, a lot of them have regret later.

And so one way to combat that is to make sure that people follow Texas law, these kids make these decisions at an older age.

Blair: Five county district attorneys in Texas issued a statement today that was calling what you and Gov. [Greg] Abbott are doing a continued onslaught on personal freedoms. What is your response to that? And then, can district attorneys refuse to prosecute these cases if they agree?

Blair: The ACLU in a similar vein tweeted that “Attorney General Paxton’s opinion and Governor Abbott’s letter have no legal effect, can’t change Texas law,” and can’t override the constitutional gender-affirming care that can be considered child abuse. This isn’t just now public people. This is a private institution that is saying this.

Paxton: Yeah. Look, the ACLU, I don’t think we agree on much, right? I mean, their interpretation of the Constitution is very different than mine. And I also feel like we are a little better prepared to deal with Texas law than they are. It’s my job. We deal with Texas law every day. And our job is to implement it and to explain it, not to pass it, not to change it. That’s up to the Texas Legislature.

Blair: Absolutely. Do you see that there might be lawsuits and challenges to this memo and this decision?

Paxton: One thing about attorney general’s opinion, it is designed to give guidance. It is not binding. It is designed to help people avoid litigation. So if you don’t want to litigate, you want to find out what the answer is, what we think a court will do based on what Texas law is, this is well-researched, literally hundreds of hours of research, trying to make sure we understand this issue. And that’s what we did here.

Blair: On the similar vein of protecting children, you are now investigating the popular social media site TikTok over allegations of both not respecting children’s privacy and human trafficking. Could you go into maybe what you found in your investigation?

Paxton: Yeah. So, this is a new investigation. This literally started last Friday. So this is really new. We’ve given them deadlines to respond to our questions. We send out questions. They’re called CIDs, civil investigative demands. They’re like interrogatories, questions about their practices. What have they done in the past? Has this occurred before? What are your practices? It’s designed to understand what they’re doing on the border.

The governor reported this to us, and has obviously gotten his information through law enforcement in Texas. And so we have an obligation to find out whether our consumers are being harmed and that’s all we’re doing here.

Blair: What is the aim of your investigation? What are you hoping to find here?

Paxton: The truth. We’re trying to find out if they’re following Texas law and whether TikTok is being used by the company to help cartels, drug smugglers, human trafficking in the state of Texas, which is clearly illegal. And so, look, if they’re doing that, they’re part of the crime.

Blair: And what would the next step be if you were to find something? Would you bring charges?

Paxton: So, we have civil authority. The only thing we have criminal authority is related to voter fraud. At least we used to, but that’s a whole other topic.

So yeah, we would start, we’d potentially file a lawsuit, and if we found criminal issues, we’d turn it over to a district attorney and hope that they would want to enforce Texas law. And that’s one of the challenges we have with some of our DAs, because many of the more large urban areas have been put in by [George] Soros. And they don’t like to prosecute crimes anymore.

Blair: Moving from one tech platform to another tech platform, you were also involved in a lawsuit against Meta, which was Facebook’s kind of parent company, over privacy protection concerns with biometric data. Could you discuss what you’re doing on that front?

Paxton: Yeah, that case, I started hearing about issues related as about three years ago. So we started working on this case three years ago. My more recent attorneys on this have aggressively pursued it better than some of the ones when I first gave it to them. So it’s picked up.

We were able to put together enough information where we believe that Facebook is basically, for every user in the state of Texas, which there’s a little over 20 million, and that does not count Instagram, if you have a picture on there, they’ve taken your facial geometry. That’s a biometric identifier.

In Texas, there was a 2009 statute that said that companies cannot use your biometric identifiers, like fingerprints and retinal scans or facial geometry, without disclosing and without your consent. It’s a $25,000 violation. It’s also a violation of our deceptive trade practices, which is another $10,000 violation. Also, it’s a violation if they transmit that information to a third party without your consent. It’s another $25,000 violation. And if they don’t destroy the information within a reasonable period of time, that’s also another $25,000.

So we’re talking about millions and millions of people having their personal information stolen and used. And look, once the genie is out of the bottle, it’s out. You don’t get it back. It’s not like your driver’s license, you can go change it, or even a Social Security number, you could actually change. This information is now out in the public and people have not agreed to have it out there.

Blair: Attorney General, that was some very interesting information. And I appreciate your time.

That was Ken Paxton, attorney general for the state of Texas. Thank you again.