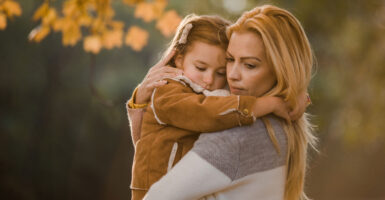 Most parents think it’s wrong for teachers to have discussions with young children revolving around sexual orientation, sexuality, gender, or gender identity—especially without their permission or participation. (Photo: Skynesher/E+/Getty Images)

Florida Gov. Ron DeSantis signed the state’s Parental Rights in Education bill more than two weeks ago, but that hasn’t halted the left’s outrage about it.

The bill, signed March 28, “prohibit[s] a school district from encouraging classroom discussion about sexual orientation or gender identity in primary grade levels,” but the left almost immediately dubbed it the “Don’t Say Gay” bill and claimed it prohibited teachers or students from uttering the words “gay” or “gender identity.”

It claimed that teachers weren’t discussing those subjects in kindergarten through third grade, and that as such the bill was unnecessary.

The bill that liberals inaccurately call ‘Don’t Say Gay’ would be more accurately described as an Anti-Grooming Bill.

If you’re against the Anti-Grooming Bill, you are probably a groomer or at least you don’t denounce the grooming of 4-8 year old children.

Silence is complicity. This is how it works, Democrats, and I didn’t make the rules.

Conservatives began to refer to the concept of talking to children about sexual orientation or gender identity—particularly on the sly in school, without parental permission or approval—as “grooming.”

The use of the term has spread, especially online.

But at least one conservative commentator, David French, slammed those on the right for using it.

“Grooming” is a strong word. It is typically associated with what abusers do to a victim, especially a child, to prepare them for coping with their abuse so they can abuse without the victim speaking up.

It is often used in the context of sexual abuse and pedophilia, but not exclusively.

I can see why it bothers the left that conservatives use the term, especially when it conjures up the image of a pedophile preparing a child for sexual abuse.

It’s important to clarify this point: Conservatives do not think the LGBT community at large is full of pedophiles any more than the rest of the population, or that every person who wants to talk to kids about their gender identity is a pedophile-in-waiting.

According to child abuse experts, “red-flag grooming behaviors” include “personal disclosure of adult sexual activity and preferences, and questions to students about their sexual lives.”

But when videos of teachers or other adults expressing their support for the LGBT community talking about their sexuality, sexual orientation, or gender identity with young children, particularly in school, circulate online, it raises the question: What purpose does it serve for an adult transgender person to tell a child about his or her gender identity in secret, while the child is supposed to be learning basic biology in class?

One of the strangest reactions to all this is for the left to ridicule the use of the word “groomer”—specifically, the semantics of the issue—rather than condemn the conversations teachers have admitted to having all over the internet.

That’s a pretty sophisticated form of manipulation: Deny any wrongdoing, attack conservatives, turn it around on the use of the word “groomer,” and either claim victimhood or make a mockery of it.

Do columnists at The Washington Post really think conservatives think Mickey Mouse is a groomer? Of course not, so why the red herring?

On the one hand, “groomer” is a strong word that evokes strong emotions owing to the context in which it typically is used.

Most conservatives are not using the word “groomer” to be inflammatory or provocative. Many use the word because it’s the most accurate term people know that describes the root of the problem conservatives have with these discussions in the first place.

Conservatives—and likely even some Democrats—think it’s wrong for adults to have discussions with young children revolving around sex and gender, whether it’s explicitly sexual content, sexual orientation, sexuality, gender, or gender identity—especially without parental permission or participation.

In fact, conservatives think it’s so egregious, they can’t see how it’s even up for debate, let alone a phenomenon that needs a law to protect against it.

The issue is fraught with emotional land mines because it involves two things that are very important in society: our children and our identity. Children have been important to society for millennia, and for the left, identity is playing an increasing role.

It’s not surprising that, in this political climate, with social media ubiquitous, one of the most explosive discussions centers on a topic of such importance that people are dissecting even this word.

Of course, how we use language is important: We make that claim regularly. But language is also imperfect. “Grooming” might not have been the best word to describe the latest culture shift, but it’s the closest one conservatives could find to identify their fears and frustration with what’s going on.

Rather than obsess over whether or not conservatives should use this word or that word, it’d be far more productive to ascertain what adults are teaching our kids in schools and whether that’s beneficial for them or not.