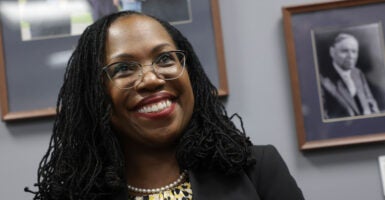 Three Republican senators—Lisa Murkowski of Alaska, Susan Collins of Maine, and Mitt Romney of Utah—joined all 48 Democratic senators and two independents in voting for Jackson.

At 51 years old, Jackson likely will serve for the next two or three decades.

Here are some things to watch for in the years ahead:

First, we will see whether Jackson follows the “methodology” she described in her Senate confirmation hearing as she votes and writes opinions. She said numerous times, for example, that judges should interpret the Constitution based on its “original public meaning.”

The Constitution, Jackson said, “is fixed in its meaning.” That sounded strange coming from a Biden nominee who had been recommended by some of the most radical left-wing groups around, but she said it.

Justice Neil Gorsuch, appointed by President Donald Trump in 2017, used the same language to describe how judges should approach interpreting the Constitution. But 41 current Senate Democrats voted to filibuster, and then to oppose, Gorsuch’s nomination.

Now, after Jackson made the same point in the same way, those same Democrats all voted against filibustering, and then to support, her nomination.

It looks like those Senate Democrats believed Gorsuch, but don’t believe Jackson.

Actions, of course, speak louder than words, so the proof will be in the way Jackson votes and writes opinions in future cases.

Over the past four Supreme Court terms since Gorsuch joined the court, he agreed (at least in part) with Justice Stephen Breyer—for whom Jackson clerked and whom she will replace—an average of 57% of the time.

If Jackson meant what she said about her methodology, that agreement with Gorsuch should take a hefty leap.

I’m not holding my breath.

Democrats themselves have used this very standard to evaluate justices appointed by Republican presidents. In their respective 2005 and 2006 hearings, for example, Chief Justice John Roberts and Justice Samuel Alito talked about judicial modesty and “calling balls and strikes.” They did not, as Jackson did, use more specific phrases such as “original public meaning” to identify the proper approach to constitutional interpretation.

Senate Democrats nonetheless compared what Roberts and Alito said in their hearings with their votes and opinions in the next Supreme Court term, and found them wanting.

In a July 2007 speech, for example, now-Senate Majority Leader Charles Schumer, D-N.Y., told the liberal American Constitution Society that senators had been “hoodwinked” and “sold a bill of goods” by Roberts and Alito. They had, Schumer said, been “well-coached” to provide “solemn salutes to modesty,” but their actions on the Supreme Court were, he claimed, something else.

That charge applies even more to Jackson, whose statements about her judicial philosophy obviously not only had been coached but scripted. She pledged seven times to “stay in my [judicial] lane” and, just as often, insisted that constitutional interpretation requires determining “what those words meant at the time that they were adopted.”

Applying the Schumer standard means that Jackson will be guilty of “false advertising” during the confirmation process if her votes and opinions in the next Supreme Court term do not match that rhetoric.

In addition, Jackson’s appointment likely will further degrade the public’s understanding of the judicial branch. According to recent polls (see here and here), more than 60% of Americans think the Supreme Court decides cases based on politics rather than the law.

Since February 2020, when then-candidate Biden promised to consider only black women for the Supreme Court, he has talked about this appointment in overtly political terms.

Black women had been demanding that they “be represented on the nation’s highest court.” Encouraging the public to view the judiciary even more in political terms will create expectations that cases involving certain issues should be decided in a politically desirable way.

This Supreme Court appointment process has been dominated by racial and gender politics, with interest groups calling for the appointment of judges who would advance “the administration’s priorities.”

Rather than her Gorsuch-like performance during her confirmation hearing, Jackson’s Supreme Court service likely will prove that Biden and his liberal supporters got exactly what they were looking for.