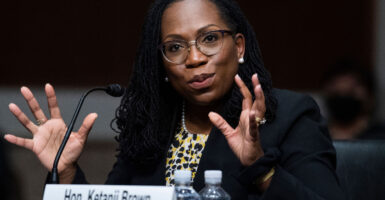 Less than a year ago, Judge Ketanji Brown Jackson was nominated and confirmed as a U.S. appeals court judge for the District of Columbia circuit. Pictured: Jackson testifies April 28 before the Senate Judiciary Committee. (Photo: Tom Williams/AFP/Getty Images)

Editor’s note: The president nominated Judge Ketanji Brown Jackson for the Supreme Court on the day after Deroy Murdock filed this commentary.

“The person I will nominate will be someone with extraordinary qualifications, character, experience, and integrity. And that person will be the first black woman ever nominated to the United States Supreme Court,” Biden said Jan. 29 in the Roosevelt Room of the White House. “It’s long overdue in my view. I made that commitment during the campaign for president, and I will keep that commitment.”

Imagine that Biden were not president of the United States, but, say, the president of United Airlines. What would happen if Biden announced that he would hire only a black woman as the carrier’s new general counsel?

Top-flight legal experts agree: Biden would be in a heap of trouble.

“If almost any private or public sector employer restricted potential hires by race and sex, that employer would be in clear violation of Title VII of the 1964 Civil Rights Act, 42 USC 1981, and a host of state and local antidiscrimination laws,” Peter Kirsanow, a member of the U.S. Commission on Civil Rights, told me. “That employer could be subject to monetary damages to the excluded applicants as well as injunctions against the prohibited practice.

“By so blatantly limiting his selection to black females, the nominee—regardless of how impressive she may be—will inescapably be viewed by a large swath of America as ‘the black female justice,’ and her opinions will be viewed through that lens,” said Kirsanow, who is black. “What an egregious insult to the nominee, our society, and the rule of law.”

“The Constitution’s Article 6 specifically provides that no religious test shall ever be required,” Dershowitz explained on Fox News Channel’s “Sunday Morning Futures” on Jan. 30. Dershowitz, who is white, continued: “I think the 14th and 19th Amendments also extend that to no racial or gender tests. Nobody should ever be excluded because they don’t fit racial or gender criteria.”

University of California at Berkeley law professor John Yoo contends that if Biden conducted such a discriminatory job search as a corporate executive, he would be under heavy pressure internally.

“If Biden were president of a company, his board of directors already would have fired him for poor performance. But if he were to say that he would hire only a black female officer or general counsel, his board would have been rid of him even faster, because he would be exposing his company to a lawsuit for racial discrimination in violation of Title VII of the Civil Rights Act of 1964.”

Would Biden be in graver legal jeopardy if he used exclusive rhetoric to say, “I refuse to nominate anyone who is white, Hispanic, Asian, or male,” rather than inclusive words to declare, “I will name a black woman”? Would the former, more blatant language trigger the Civil Rights Act and/or any other anti-discrimination laws?

“No,” said Yoo, whose ancestry is Asian. “Title VII does not apply to presidential appointments. Biden is a creature of the government, and he is saved because the government, unfortunately, does not have to obey the same rules that apply to all other Americans.”

As usual, Biden is doing the wrong thing, and he will get away with it. The laws that shackle this nation’s mere mortals are barely bracelets to Washington’s unbridled politicians.