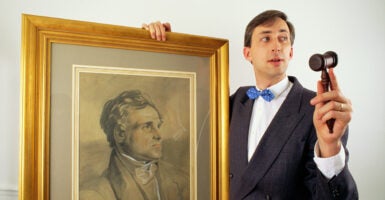 Opponents of occupational licensing secured a victory this week in their battle against excessive state regulations that erect barriers to competition in various fields.

One of those opponents, who knows full well the burdensome effects of occupational licensing, is Will McLemore. In 2006, he started McLemore Auction Co. as one of the first online auction houses in America.

At that time, most auctioneers practiced only in live auctions, but as the internet has done for so many things, auctioneering began to change. The growth of online shopping resulted in tremendous opportunities for auctioneers.

However, in 2019, the Tennessee General Assembly passed legislation requiring all auctioneers to be licensed. To get a license, auctioneers had to meet requirements so onerous that they kept interested and otherwise qualified entrepreneurs out of the business altogether.

That year, McLemore and other members of the Interstate Auction Association filed an initial complaint against the state of Tennessee.

According to the complaint, any company looking to facilitate online auctions would need to have at least one employee “serve in an apprentice capacity under a full-time principal or automobile auctioneer for six months, take an examination, pay fees, and undergo continuing education.”

In addition, the auction company would have to “maintain a place of business in the state, or register as a nonresident, maintain an escrow account that keeps proceeds from auctions in Tennessee, agree to be audited, and file an irrevocable consent to suits and actions in Tennessee courts.”

Tennessee was one of the first states in the country to explicitly require licenses for online auctions, even though it had no evidence that consumers were harmed.

As my Heritage Foundation colleague Paul Larkin has written, occupational licensing has become “one of the nation’s principal forms of economic regulation” over the past 70 years. And although McLemore himself was licensed as an auctioneer, he was directly injured by the licensing requirements because the people with whom he regularly worked to operate and build his business could not get licensed—and because of that, they could not work.

McLemore, in one of his arguments, said Tennessee licensing law is unconstitutional because it imposed an excessive burden on interstate commerce.

The commerce clause of the Constitution (Article 1, Section 8, Clause 3) gives Congress the power “to regulate commerce with foreign nations, and among the several states, and with the Indian tribes.” The commerce clause gives Congress plenary authority to regulate interstate commerce, and Congress uses it to justify exercising legislative power over the activities of states and their citizens, leading to a robust, ongoing debate on the balance of power between the federal government and the states.

The commerce clause long has been interpreted by the courts as both an explicit grant of congressional authority and as an implicit limitation on the regulatory authority of states. This has led to a line of precedent on the “dormant” commerce clause, establishing an implicit prohibition against states’ passing legislation that discriminates against or excessively burdens interstate commerce.

Before a state may regulate a business, it must establish that a “substantial nexus” exists between the business and the state. McLemore and the other auctioneers argued, and the judge agreed, that the Tennessee law contains no such geographic limitations.

Would the law apply to online auctions conducted in adjoining states by businesses that advertised in Tennessee? What if the owner of the auction site initiated an online auction while passing through Tennessee?

Even Tennessee had to admit that the presence of the internet and the auctioneers’ work in an online format made legal analysis of the licensing rule “trickier.”

The state ultimately was unable to articulate a clear limiting principle for the potential “extraterritorial” (out-of-state) effect of the law. The state’s failure to do so played a significant role in the court’s analysis.

As recently as 2019, in another case out of Tennessee, the Supreme Court reinforced the continued viability of the commerce clause’s restriction on state regulatory actions that affect interstate commerce. In Tennessee Wine & Spirits Retailers Ass’n v. Thomas, the court said:

In recent years, some Members of the Court have authored vigorous and thoughtful critiques of this interpretation. But the proposition that the Commerce Clause by its own force restricts state protectionism is deeply rooted in our case law. And without the dormant Commerce Clause, we would be left with a constitutional scheme that those who framed and ratified the Constitution would surely find surprising. That is so because removing state trade barriers was a principal reason for the adoption of the Constitution.

Of this court victory for McLemore and the other auctioneers, Braden Boucek of Southeastern Legal Foundation said:

This is a huge win not only for our clients, but for all American innovators whose freedom to engage in e-commerce has been reaffirmed. E-commerce is the future and Tennessee needs to welcome it. Instead of recognizing our clients’ contributions to the state—creating a new Tennessee business and good paying jobs, choice in the marketplace, and expansion of a dynamic and fast-growing industry—Tennessee implemented this unconstitutional licensing scheme to protect the largest online auction companies in our country and traditional auctioneers. And it did so at the taxpayers’ expense.

In a strange coincidence of timing, the Supreme Court granted review Monday in a significant case involving the dormant commerce clause. That case, National Pork Producers Council v. Ross, arises from a challenge to a California law making pork sales there contingent on compliance with conditions that nearly all commercial farms in California cannot meet.

Pork trade associations and farmers claim that this requirement violates the Constitution’s dormant commerce clause, arguing that the California law regulates commerce that occurs almost entirely outside the state, since California imports over 99% of its pork.

The 9th U.S. Circuit Court of Appeals ruled in favor of the plaintiffs, agreeing that the law’s effects would “require pervasive changes to the pork production industry nationwide,” but stopped short of finding that the law violated the commerce clause.

By agreeing to hear this case next term, the Supreme Court no doubt will consider the continued viability of its prior precedents regarding the dormant commerce clause, such as Pike v. Bruce Church.

In that case, the high court held that laws with significant “extraterritorial effects” violate the federalist scheme of American government. The justices also found that even if a law does not discriminate on its face against interstate commerce, it is still unconstitutional if the burdens to interstate commerce greatly exceed the benefits to local commerce.