As Putin’s New Iron Curtain Falls, Here’s How US Can Help Part It 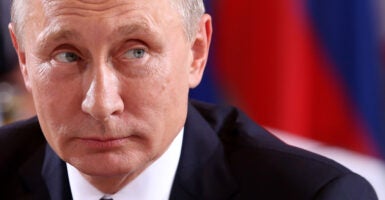 Russian President Vladimir Putin is seen here at an Oct. 19, 2016, meeting in Berlin with leaders from Ukraine, France, and Germany to discuss the Ukrainian peace process, aimed at resolving the conflict in Ukraine after Russian forces invaded it the first time in 2014 and annexed the Crimean Peninsula. (Photo: Adam Berry/Getty Images)

Daniel Vaynshteyn is a member of the Young Leaders Program at The Heritage Foundation.

While the international community grapples with the millions of Ukrainian refugees fleeing their war-torn nation, there has been a quieter exodus of middle-class Russian citizens fleeing their country since the beginning of Russian President Vladimir Putin’s second invasion of Ukraine.

It’s been estimated that roughly 200,000 Russians have already left the country, traveling anywhere that will accept visa-free travel.

The reason for this mass migration in such a short period of time is simple as Russians heard their own president state: “I am convinced that such a natural and necessary cleansing of society will only strengthen our country, our solidarity, cohesion, and readiness to respond to any challenges.”

Putin’s “societal cleansing” is meant to eliminate any remnants of political opposition and liberal institutions and values within his country’s borders.

It’s also a direct threat to any citizen within Russia’s borders who opposes anything the Kremlin says or does. Individuals are fleeing Russia in search of political freedom and a genuine desire to live in a free and democratic society that values the rule of law.

The Kremlin’s extreme crackdown on dissent and civil liberties as well as its isolation from the Western world has begun the rebuilding of the Cold War-era Iron Curtain.

That term was coined by Winston Churchill to represent the physical and ideological divides between communist Eastern Europe and the democratic West.

Since the start of the second invasion of Ukraine, the Russian government has arrested more than 13,000 of its own citizens for peacefully protesting and speaking out against Russia’s war in Ukraine.

Russia has also enacted new censorship legislation that criminalizes opposition to the government’s actions and can land an individual up to 15 years in prison for simply calling the invasion of Ukraine a war.

The government also has banned independent media and has throttled citizens’ access to social media.

There has also been an exodus of Western business from the nation as well, with more than 400 Western companies promising to suspend operations or leave completely from the Russian Federation as a direct response to the invasion of Ukraine.

Those developments suggest that Russia is regressing back to the closed society of the Soviet Union and is beginning to be as isolated as its predecessor.

The mass arrests of protesters echo the past purges of opposition under the reign of Josef Stalin. The Russian state media have become effectively the equivalent of a new Pravda, the official publication of Soviet communists, providing citizens with only state-fed propaganda while the state denies access to any other forms of media.

Even Putin’s justification for launching the invasion, the so-called crusade to “de-Nazify” Ukraine, can be traced back to the writings of Karl Marx and to Soviet disinformation campaigns beginning under Stalin’s regime.

As the new Iron Curtain continues to form in Eastern Europe, Alexander Baunov, a senior fellow at Carnegie Moscow, contends that, “All the vestiges of liberalism will be purged.” Russian citizens terrified at the authoritarian shift in their government will continue to flee.

It’s not implausible to suggest that perhaps the response by the Russian state to the exodus will be similar to the Soviet Union’s, which was to shut down its border and attempt to restrict the movement of its citizens.

The United States and NATO must begin to acknowledge the masses of Ukrainians and Russians fleeing their nations, but for very different reasons.

Ukrainians don’t have a choice in fleeing because their situation is life-or-death. Russians do have a choice, but the ones fleeing are seeking refuge from political persecution.

The United States during the Cold War supported and assisted Soviet dissidents. If we are to have a long-term strategy to combat the Kremlin and break the Iron Curtain a second time, it should be a priority to protect and support the brave Russians who are standing up and fleeing tyranny.