Putin Weaponizes Refugees in Ukraine, Just as He Did in Syria 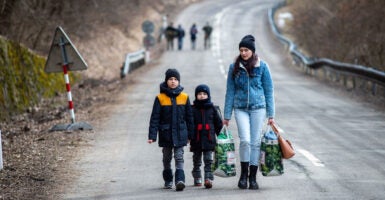 A woman and two children flee Ukraine on foot after crossing the Slovak-Ukrainian border in Ubla, eastern Slovakia, close to the Ukrainian city of Welykyj Beresnyj, on Feb. 25, following Russia's invasion of Ukraine. Since then, an estimated 1 million Ukrainians have fled the country. (Photo: Peter Lazar/ AFP/Getty Images)

The Ukraine crisis will affect many regions around the world, including the Middle East.

As Russia’s invading forces pivot to siege warfare around Ukraine’s big cities, Moscow is likely to resort to scorched-earth tactics previously unleashed on the cities of Aleppo in Syria and Grozny in Chechnya.

The Russian bombing campaign in Syria—which began after Russian President Vladimir Putin’s 2015 military intervention to prop up the regime of Syria’s Bashar Assad—pulverized Aleppo, a stronghold of anti-Assad resistance.

Indiscriminate attacks on civilians triggered the exodus of 6.8 million Syrian refugees to neighboring countries and to countries of the European Union, and displaced an additional 6.7 million civilians inside Syria.

Syria remains the world’s largest refugee crisis and continues to fuel political instability in nearby countries.

This influx of refugees will disrupt the economies, social systems, and politics of neighboring countries, while weakening Ukraine’s economy, independence, and long-term capacity for resistance.

Their presence became a social and economic burden on host countries and triggered political backlashes in several European countries.

Putin may choose to escalate Russia’s attacks on civilians in northern Syria to threaten Turkey with another tidal wave of refugees, if the Turkish government tilts too far in favor of Ukraine in the war.

Turkey sold Ukraine Bayraktar TB2 drones before the war that reportedly have inflicted significant losses on Russian military forces. Moscow will not be shy about threatening Ankara with retribution if it provides Ukraine with additional military support.

As Putin is forced to ramp up his efforts to subdue Ukraine in the face of stubborn resistance, it will not be a surprise if he becomes more aggressive in Syria, too.

Russia continues to wage a relentless air war against anti-Assad rebels there, although it has received little international attention.

Russian warplanes in January bombed the water infrastructure in the city of Idlib, a rebel enclave in northern Syria that has attracted many displaced Syrians.

If Putin decides to reopen the spigot on the flow of Syrian refugees to punish Turkey, Idlib again is sure to find itself a target of Putin’s scorched-earth tactics.

How Does the Ukraine-Russia Conflict End?

Here’s What Americans Need to Know About Ukraine

4 Reasons Why Americans Should Care About the Situation in Ukraine

U.S. Must Be Wary of Doomed Peace Accord in Syria