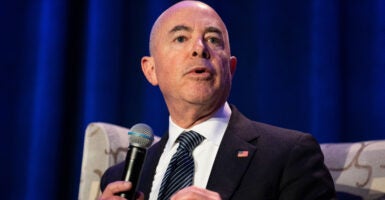 The Biden administration is publicly proud of its open border policies and seeks to “expand on the historic progress” it has made over the past year to spend even more taxpayer money in 2023 to process even more illegal aliens into the country and grant them asylum.

In his statement for President Joe Biden’s $97.3 billion Department of Homeland Security budget request, Secretary Alejandro Mayorkas makes an obligatory reference to safeguarding the American people and securing our borders against terrorists, transnational criminal organizations, and other threats.

Starting at the border, the administration expressly calls for processing “noncitizens” (read: illegal aliens) into the U.S. After seeking $2 million for additional beacons to light the way for illegal immigration, the administration wants to hire 300 new Border Patrol agents ($65 million) and 300 new Border Patrol “processing coordinators” ($23 million) to “respond to” the border crisis.

The administration unironically states that “the additional processing coordinators will allow existing agents to focus on their core counterterrorism, law enforcement, and security missions.”

It doesn’t care that such processing will generate millions more migrants to illegally cross our border, overwhelming the Border Patrol agents and making a mockery of their core missions.

Next, the president wants American taxpayers to fund the medical care of the endless flow of illegal aliens. His budget seeks $69 million for illegal alien processing and care requirements through contracted medical support for individuals in Customs and Border Protection custody at about 63 locations.

Additionally, the administration wants $32 million for medical claims costs, and $29 million to further bloat the bureaucratic Department of Homeland Security with a new Office of the Chief Medical Officer.

To process even more illegal aliens into the U.S. faster, the administration wants $140 million of taxpayer money to design and construct a permanent joint processing center on the border.

That facility would have “dedicated space for multiple agencies and organizations to operate” and “will yield processing efficiencies.”

It states: “Due to recent high volumes of family units and unaccompanied children at the southwest border, [Customs and Border Protection] anticipates that an increase in flights, ground transportation, and facility guarding will be required to transport and secure” illegal aliens.

That will cost Americans an additional $97 million. Again, the administration tries to justify the expense by claiming it will significantly reduce the number of Customs and Border Protection agents and officers required for securing and transporting detainees, which allows those agents and officers to focus on critical front-line law enforcement operations.

It won’t acknowledge what Americans easily understand; namely, that Biden’s policies of releasing family units and enticing more parents to send their children across the border unaccompanied cause the high volumes.

The Department of Homeland Security has wrongfully delegated a significant amount of what are inherently government functions as referenced above to organizations in the requested joint processing center.

Those organizations include faith-based and other open-border advocacy groups. The administration uses taxpayer money to pay these organizations through Federal Emergency Management Agency grants.

The proposed budget seeks an increase of $24 million for the Emergency Food and Shelter Program as humanitarian relief. The budget explains this grant program provides food, shelter, transportation, COVID-19 testing, and care associated with recommended quarantining and isolation of this population.

Once the illegal aliens have entered the U.S., with the assistance of Customs and Border Protection and nongovernmental organizations, the administration seeks to keep them in the U.S. by drastically decreasing detention and removals.

The proposed budget would cut funding for 5,000 adult detention beds and eliminate all 2,500 family beds. Instead, the administration includes $25 million for Immigration and Customs Enforcement’s emergency family shelter beds to address short-term family accommodation for “processing families prior to release.”

They clearly have no issue with catch-and-release policies, which smugglers advertise to future illegal aliens, and the flow continues unencumbered.

Those methods include home visits, office visits, alert response, and court tracking. The administration is contemplating and piloting additional alternatives to detention programs, such as home confinement and a Young Adult Case Management Program.

The administration justifies using such programs because they enable Immigration and Customs Enforcement to supervise “a larger population of individuals moving through the immigration process than it could relying on detention alone.”

Alternatives to detention participation exceeded 142,000 individuals as of mid-February, and it will “accommodate” 170,000 “participants” in fiscal year 2023. In other words, enforcement must bend to the administration’s priority of processing more illegal aliens into the country.

Alternatives to detention require significant resources because supervision is labor-intensive. Also, a 2020 Department of Homeland Security Enforcement Lifecycle Report has shown that unless a deportable alien is fully detained, 85% will not be removed from the U.S.

The budget includes $2.3 billion, a $162 million increase, for Immigration and Customs Enforcement  “homeland security investigations.” That increase would include $18 million for the department’s Center for Countering Human Trafficking to investigate traffickers, protect victims, and to coordinate Department Homeland Security-wide anti-trafficking efforts.

If the Biden administration didn’t spur and maintain such historic levels of illegal immigration, including by unaccompanied alien children, there would not be a need for so many investigations.

Furthermore, the administration’s victim-centered approach includes providing trafficking victims with visas and work authorization. Prevention is a far better approach—for both the migrants and Americans.

Beyond simply not detaining deportable aliens in the U.S. to allow for them to stay here, the administration is taking the further step of legalizing the masses by abusing our asylum system.

Mayorkas notes in his budget statement that last week, the departments of Homeland Security and Justice published an interim final rule to expedite the processing of asylum claims at the southern border.

The rule will allow U.S. Citizenship and Immigration Services asylum officers, rather than immigration judges, to hear and decide asylum applications.

The rule removes Immigration and Customs Enforcement attorneys from the process, and with them, cross-examination of the applicants. Without an adversarial process, many more ineligible asylum applicants will be granted asylum based on their ability to appear credible.

That will only encourage more asylum fraud.

Mayorkas goes on to state that the budget seeks $375 million and more than 1,100 new staff “to support operationalizing this important rule, so that those who are eligible for asylum are granted relief quickly.”

However, seeking appropriations to fund benefit adjudications breaks with the important fiscal policy that such services be fee-funded by the applicants, not the U.S. taxpayers.

Adjudication of the scores of available immigration benefits is paid for by application fees. Citizenship and Immigration Services aggravates this model by waiving and exempting too many of the fees.

Asylum is just one example of an exempt fee. Citizenship and Immigration Services charges $0 for an applicant to file an asylum application. Not only does this encourage asylum fraud, but it also burdens other types of applicants who must subsidize the cost to adjudicate asylum.

Congress should not appropriate funds for asylum adjudications. Instead, Citizenship and Immigration Services should charge a fee for asylum applications.

This request for asylum appropriations also reveals how resource-depleted Citizenship and Immigration Services is to adjudicate asylum cases.

The reason is simple. The Biden administration has opened our borders on three fronts, resulting in chaos and unmanageable numbers of asylum and refugee applications from the southern border, the Afghanistan evacuation, and a new offer to resettle up to 100,000 Ukrainian refugees.

The administration then seeks even more appropriations ($389 million) and an additional 1,558 staff for Citizenship and Immigration Services to reduce its application backlog.

Applicants have already paid for those applications sitting in the more than 8.4 million pending-applications pile. Yet now, the Department of Homeland Security wants to be paid again to adjudicate the same cases.

Meanwhile, the administration is rapidly increasing the backlog with its open-border policies and encouraging more illegal aliens to apply for asylum (free of charge) and taking on Afghan and Ukrainian applications (also free) as well.

American taxpayers should not fund this request. Citizenship and Immigration Services must change its fee structure to charge for all types of applications to completely cover its adjudication costs.

If an alien wants to apply for an immigration benefit, the alien should pay, not U.S. taxpayers. And with the backlog, the applicants already did pay.

Mayorkas doesn’t seem to abide by that philosophy. He said his department’s budget includes billions of dollars to keep America’s borders secure and enforce our immigration laws. His budget clearly shows otherwise.

Our borders are wide open on many fronts, immigration enforcement officers are directed to process illegal aliens into the country, rather than detain and remove them, and the administration is intent on rewarding the masses with asylum, even though many are not eligible under the law.

The Biden administration has lost all credibility regarding border security and immigration. Tragically, as a result, Americans are losing our sovereignty, our security, and our prosperity.