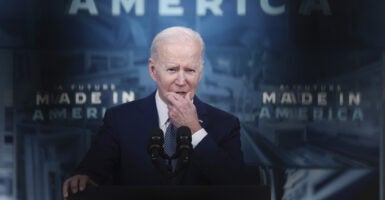 Those being hurt most by inflation are the same low-income Americans that the Biden administration claims to care so much about. Pictured: President Joe Biden, speaking in Washington on March 4, talks about the February jobs report. (Photo: Win McNamee/Getty Images)

I have been writing for years about how progressive policies championed by the Democratic Party and served up under the guise of caring about low-income Americans wind up hurting these very communities.

The latest chapter in this saga is the newly unleashed round of inflation, the worst our country has seen in 40 years.

Two important points here are that first, we can lay responsibility for this inflation directly at the doorstep of the Biden administration, and second, those being hurt most by this inflation are the very low-income Americans that this administration claims to care so much about.

A recent report from the Federal Reserve Bank of Minneapolis focuses on the disparate impact of inflation on different communities, and how it causes the most damage to low-income Americans.

According to the report, although one number for inflation is reported nationally, different households do not equally take the brunt.

According to a Gallup survey from late 2021, 45.5% of all Americans reported experiencing “severe” or “moderate” hardship caused by inflation.

The tragedy is that inflation is not a surprise attack. We know what causes inflation. Like many physical diseases, we know what their causes are, and those that become victims do so not out of lack of knowledge, but out of irresponsible behavior.

Despite the fact that we know the damage that smoking causes, or excessive drinking, or improper diet, people still do it.

We know that inflation is caused by pouring excessive money into the economy. If today an apple costs $1, and tomorrow the government prints another dollar, without producing another apple, the price of an apple will jump to $2.

Economists were reporting widely that the Biden administration was spending too much money and that this profligate spending was being enabled by the Federal Reserve.

Harvard economist and former Treasury Secretary Lawrence Summers wrote in The Washington Post last May, almost a year ago: “The inflation risk is real.” Summers noted that the problem is “overheating” and “not excessive slack.”

This in the wake of the Biden administration’s $1.9 trillion “relief” spending and the beginning of trying to pass the $4 trillion Build Back Better program, which was stopped by the courageous renegade Democrat senator from West Virginia, Joe Manchin.

Meanwhile, the Federal Reserve, under the leadership of Chairman Jerome Powell and in its statement at the end of last April, was still predicting 2% inflation and calling the current jump in prices “transitory.”

In July 2021, economists Steve Hanke of Johns Hopkins University and John Greenwood of Invesco predicted in The Wall Street Journal: “By the end of the year, the year-over-year inflation rate will be at least 6% and possibly as high as 9%.” It reached 7.9%.

Yet, in November, President Joe Biden renominated Powell to a second term as Federal Reserve chairman, despite his gross mismanagement that led to the inflation we are now experiencing. Biden, in his statement, praised Powell for his “decisive action” and “steady leadership.”

Low-income Americans who are trying to stay above water in this new flood of inflation are probably less grateful to Biden and Powell for this so-called leadership.