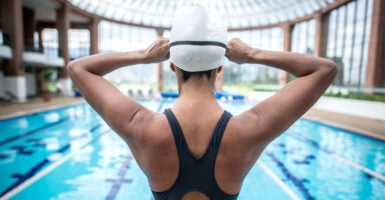 Kentucky lawmakers passed the Save Women’s Sports Act, which bars biological males from participating in female sports and requires school sports leagues to determine students’ gender on the basis of their sex at birth. (Photo: Andresr/Getty Images)

Arizona, Kentucky, and Oklahoma are the latest states considering bans on biological males participating in girls and women’s sports, with all three states passing legislation Thursday addressing the issue.

Kentucky lawmakers on Thursday passed the Save Women’s Sports Act, which bars biological males from participating in female sports and requires school sports leagues to determine students’ gender on the basis of their sex at birth.

It remains unclear whether Gov. Andy Beshear, a Democrat, will sign the legislation, though the state Legislature has a Republican supermajority that could overturn a potential veto.

Oklahoma legislators passed a bill also titled the Save Women’s Sports Act on Thursday. The bill would bar biological males from participating in girls sports, including at the collegiate level. The legislation currently awaits the signature of Gov. Kevin Stitt, a Republican.

The legislative efforts have drawn criticism from LGBT advocacy groups, who view the laws as discriminatory against transgender individuals.

BREAKING: The Senate just gave final passage to #SB83 to ban trans girls from girls’ sports. It now heads to @GovAndyBeshear. This is rooted in hate, unconstitutional, and could jeopardize KY universities’ participation in NCAA. #KYGA22 pic.twitter.com/Gh0jS9wxR9

“The adults in the Kentucky General Assembly are attacking our children to score cheap political points,” the American Civil Liberties Union of Kentucky said Thursday on Twitter. “Shame on them.”

The Human Rights Campaign condemned the Oklahoma House for considering the bill in a statement Wednesday.

“[The bill] effectively excludes all transgender girls from participating in school athletics, increasing their isolation and denying them the social, physical, and emotional benefits of sports,” the Human Rights Campaign said.

The bills follow a wave of new state laws addressing the participation of biologically male athletes who identify as transgender in women’s sports.