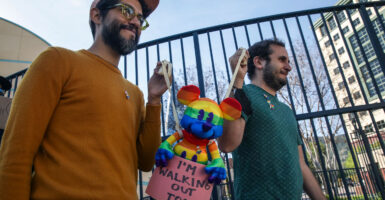 The libertine left seems extremely aggressive in every corporate workplace today, and it demands that everyone conform with its Orwellian lingo of “inclusivity.” No dissent is allowed from the orthodoxy of the Church of LGBTQIA+.

The folks at Disney—who many moons ago were seen as an entertainment factory for children—have been heavily pressured into submission on a proposed law in Florida that dares to suggest, “Classroom instruction by school personnel or third parties on sexual orientation or gender identity may not occur in kindergarten through grade 3 or in a manner that is not age-appropriate or developmentally appropriate for students in accordance with state standards.”

As Bugs Bunny said in the old cartoons, “Of course, you realize this means war.”

The LGBT lobbyists inside Disney’s labor force shamed CEO Bob Chapek out of any attempt to be neutral or avoid “cultural clashes.” Not only did Chapek have to apologize for his allegedly heinous neutrality, but the Disney brands then unleashed a social media parade of wokeness in opposition to Florida Gov. Ron DeSantis and the Republicans who would shield little kids from kindergarten transgender crusades.

As always, conservatives were accused of “marginalizing” the militants. The streaming service Hulu—using the appropriate self-owning label of “Hulugans”—proclaimed, “We stand with our LGBTQIA+ colleagues, storytellers, families, friends, and fans who are targeted by laws that marginalize and diminish their identities and lives. We remain committed to telling inclusive stories that unite us and celebrate the diverse LGBTQIA+ community.”

The woke patrol at ESPN echoed that tweet: “ESPN believes in inclusivity and denounces legislation and actions across the United States that infringe on any human rights. We stand with our LGBTQIA+ colleagues, friends, families, and fans.”

Five-year-olds must be free to learn about “sexual orientation and gender identity” or “human rights” have been infringed.

Now imagine that Christian conservatives wanted to be free to do Bible study with kindergartners in public schools. Those “human rights” have been infringed for decades.

The “inclusive” people believe in pushing the Gay gospel on children from “backward” (in their minds “abusive”) homes, to liberate children from benighted Bible-thumping parents.

Even ABC News joined in, although it skipped openly denouncing the Republican legislation. The ABC News PR Twitter account announced: “ABC News is supportive of our LGBTQIA colleagues, their families, and the [gay] community. ABC News is a safe, inclusive, and respectful community for all, and our culture is one of unity, kindness, and equality. We believe in everyone’s right to freely be who they are and to live and thrive authentically.”

This lingo is ludicrous.

Conservatives and their children don’t have a right to “freely be who they are.” Imagine a third grader energetically dissenting from “gender identity” lessons. Let’s guess they get sent to the principal’s office for being out of line.

You certainly can’t imagine a conservative feeling “free to be me” inside any of these woke media outlets. The hard-liners at GLAAD (best recognized as the Gay and Lesbian Alliance Against Dissent) are now pushing a “Studio Responsibility Index” to force the movie studios out of any attempts at neutrality.

CEO Sarah Kate Ellis tweeted, “Corporations need to be held accountable for their silence on anti-LGBTQ bills in states where they do business. That’s why we’re updating our Studio Responsibility Index to hold Hollywood accountable.”

Wokeness is mandatory. “Silence” is not an option. Parental opposition is disgusting. This is from the same leftist media that paint themselves as heroic defenders of democracy. That’s Orwellian, too.