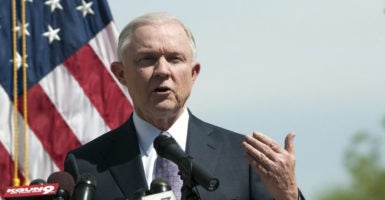 Attorney General Jeff Sessions paid a visit to the U.S.-Mexico border today during a trip to Nogales, Arizona, where he spoke to a group of Customs and Border Protection agents and prosecutors.

He referred to the southwest border as “ground zero” in the fight against “transnational gangs like MS-13 and international cartels [that] flood our country with drugs and leave death and violence in their wake.” He added that “it is here that criminal aliens and the coyotes and the document-forgers seek to overthrow our system of lawful immigration.”

Sessions pledged to ratchet up the fight against “criminal organizations that turn cities and suburbs into warzones, that rape and kill innocent citizens, and who profit by smuggling poison and other human beings across our borders” using “[d]epravity and violence a[s] their calling cards, including brutal machete attacks and beheadings.”

Sessions declared: “For those that continue to seek improper and illegal entry into this country, be forewarned: This is a new era. This is the Trump era. The lawlessness, the abdication of the duty to enforce our immigration laws, and the catch and release practices of old are over.”

Sessions backed up this statement by unveiling a series of new policies.

First, he announced that each of the 94 U.S. attorney’s offices must now designate one of their prosecutors as a border security coordinator. Additionally, he announced that every federal prosecutor should consider prosecuting anybody accused of committing immigration-related offenses using the following guidelines:

Sessions also announced that he would take measures to accelerate some initiatives that had previously been announced. He stated that the administration would appoint 50 more immigration judges this year and 75 more next year.

This is welcome news indeed, since there are over 540,000 cases pending before 301 immigration judges, which works out to about 1,800 cases per judge.

Sessions also announced that the Justice Department had “already surged 25 immigration judges to detention centers along the border.”

In addition to proceeding with building a wall along the Mexican border, the Trump administration has called for the hiring of 5,000 more Border Patrol agents and 10,000 more Immigration and Customs Enforcement agents over the next couple of years.

The White House has also sought to reinvigorate cooperation agreements (which became dormant during the Obama administration) with state and local officials who seek to perform the functions of, and otherwise assist, immigration officers in relation to the investigation, apprehension, and detention of illegal immigrants.

These efforts have already started to bear fruit. Sessions noted that from January to February of this year—at a time when illegal immigration usually rises by 10 to 20 percent—illegal crossings dropped by 40 percent.

According to Homeland Security Secretary John Kelly, fewer than 12,500 people were stopped at the border in March, the lowest monthly figure in at least 17 years. Sessions also stated that illegal crossings have dropped a whopping 72 percent since Trump was inaugurated.

Not everyone is supporting the administration’s efforts, though. Several cities, including New York, Seattle, Baltimore, Philadelphia, Los Angeles, San Francisco, and Washington, D.C., have declared themselves to be sanctuary cities and are resisting the administration’s efforts to combat illegal immigration, thereby putting their residents in jeopardy.

Perhaps this is what Sessions had in mind when he poignantly added toward the end of his remarks:

Why are we doing this? Because it is what the duly enacted laws of the United States require. I took an oath to protect this country from all enemies, foreign and domestic. How else can we look the parents and loved ones of Kate Steinle, Grant Ronnebeck, and so many others in [the] eye and say we are doing everything possible to prevent such tragedies from ever occurring again?

When it comes to enforcing our nation’s immigration laws, clearly there is a new sheriff in town. His name is Jeff Sessions, and illegal immigrants had better beware.