Movement for Restoring Parental Rights in Schools Represents the Majority 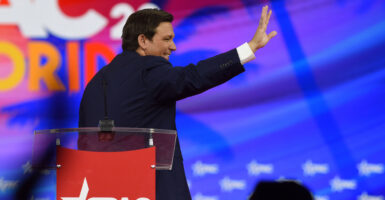 Florida Gov. Ron DeSantis waves as he leaves the stage after addressing attendees on Day One of the 2022 Conservative Political Action Conference in Orlando, Florida. (Photo: Paul Hennessy/SOPA Images/LightRocket/Getty Images)

The grassroots parental rights movement is picking up steam, and it’s pushing legislators to act.

On Tuesday, the Kansas Legislature passed a “parents’ bill of rights” that would allow parents to “inspect any materials, activities, curriculum, lessons, syllabi, surveys, tests, questionnaires, examinations, books, magazines, handouts, professional development and training materials and any other materials or activities that are provided to the parent’s child.”

It’s a notable step as many public schools don’t give the public access to this information. It can be extremely difficult for parents and the public to have any knowledge about what’s being taught in the public schools that their taxpayer dollars pay for.

That’s changing. The Kansas bill is just one piece of a much larger national puzzle. A growing movement of parents is fighting back against schools that have prioritized indoctrination and the interests of teachers unions over parents and children.

Some states have taken the lead on these issues.

Perhaps most notably, the Florida Legislature passed a bill in early March that removes discussions about sex and gender identity from the curriculum of classrooms with young children. It moves those discussions back to where they are most appropriate: at home with families and their children.

Left-wing and corporate media outlets clearly tried to derail the bill. They almost uniformly picked up the language of left-wing activists and labeled it the “Don’t Say Gay” bill, despite the fact that the legislation has nothing to do with not saying “gay.”

Big Tech social media companies are quite eager these days to dictate what counts as “misinformation.” Isn’t it interesting that they don’t do a thing about the “don’t say gay” headlines that proliferated in the lead-up to the Florida bill’s passing?

Regardless of the disinformation from the media, the Florida bill passed, and as of this article’s publication, it sits on Florida Gov. Ron DeSantis’ desk for signing. DeSantis has made it quite clear that he won’t be deterred by media hysteria over this issue or woke corporate bullying.

When Disney CEO Bob Chapek met with DeSantis to air the grievances of woke Disney employees over this bill, the Florida governor did not fold.

That kind of courage is contagious. One man with courage may not really make a majority, but it might encourage a majority to act when times are desperate and the cause is just.

A critical factor in this fight over parental rights, transparency, and curriculum is that while the institutions are seemingly all in on the woke revolution, the people aren’t.

A poll conducted on behalf of The Daily Wire on March 12-13, after the Florida bill was passed, showed that a majority of those surveyed supported the most important features of the legislation. And so, the movement spreads.

Arizona has also been working on a parental rights bill that was recently passed in the state Senate.

There are many other states, too. Conservative activist Christopher Rufo wrote in February that “legislators in 19 states have introduced bills to require curriculum transparency statewide.”

From the introduction of radical gender theories, to critical race theory, to ridiculous COVID-19 restrictions, it’s clear that many Americans have had enough and are becoming a potent political counterweight in an environment once dominated by teachers unions.

As Jonathan Butcher, an education policy expert at The Heritage Foundation, wrote of the Kansas bill and parental rights legislation in general:

These parental bills of rights put parents back at the center of intimate questions regarding a child’s mental and physical health. The proposals also empower parents to make decisions as they protect their children from radical, explicit sexual teaching content—along with racially discriminatory material—being used in state public schools.

Transparency in public K-12 education is both popular and necessary. It’s a good sign that at least some political leaders are stepping up to turn grassroots energy into concrete legislation and policy change.

However, it’s important not to be lulled into thinking that the passage of these bills is “mission accomplished.” Parental rights and transparency in public school curricula merely establish beachheads in the greater battle over education in America.

The left’s long march through the institutions is nearly complete, and it would be unwise to think this larger debate over what America should be is going to end after a single piece or several pieces of positive legislation. Much work still needs to be done.

If we really do intend to pull education in America back from the brink, then our attitude must be like the great sea captain John Paul Jones.

We have not yet begun to fight.